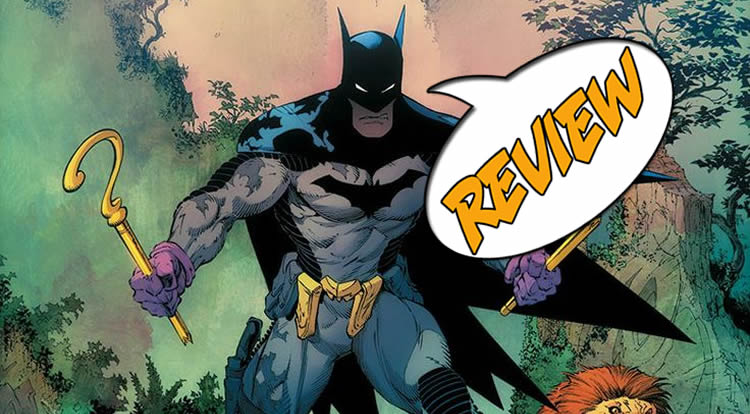 I had a great Batman Day on Wednesday, and I hope you did, too! The store I was at had a lot of people dressed in Bat-clothing, including a young Batgirl in black and yellow!

DC did a smart thing by bringing together the celebration of Batman’s 75th anniversary as well as the conclusion to “Zero Year” on the same day. Batman #33 was a fitting conclusion to this re-imagination of the Dark Knight’s origin, in my opinion.

Previously in BATMAN:  “It’s been one hell of a year in Gotham City, and it all comes down to this: Batman vs. The Riddler! Gotham City and the Dark Knight will never be the same! Don’t miss this special, extra-sized finale of ‘Zero Year!’”

I often start off talking about the writing, so this time, I thought I’d try something different and discuss the art first.

I’ve reached the place where I can hardly imagine Batman without Capullo and Miki’s talents gracing the pages.

I keep looking at Batman’s face with the mask on. It’s perfect. And in this issue, Batman’s cowl really is important as he takes on the Riddler, who is smiling most of the time. The grim Dark Knight is the idea opposite number for him, just as he is for the Joker.

Also, the rest of this Bat-costume is great. He’s wearing the purple gloves the hero so famously wore in the Bat-Man’s first appearance, and Capullo integrates the mobility Batman’s going to need when the action starts.

The battle sequences are strong and propel the story along easily. Also, the character faces make us feel for the people and understand what’s going on with our emotions as well as our intellect.

Oh, and there’s a two-page spread that’s completely black. And even that stands out well. Yup, it’s a terrific issue as far as the art goes.

SNYDER WRAPS ‘ZERO YEAR’ UP WITH A BANG

I’ve mentioned before how thrilled I’ve been about Edward Nygma getting a serious upgrade. Mr. Snyder has elevated him to a level the Riddler’s never been at before. When Batman has to take on the Riddler by solving puzzles, it’s not silly, but tremendously deadly as far as consequences. I loved that!

We also see just how important Alfred is to Batman, and that’s critical moving forward. After vanquishing Nygma, the Dark Knight has to place himself in danger to save the city. Even Batman is human, and Alfred says he’ll “always be there to patch” him up.

There’s a touching sequence in which Alfred imagines an alternate future for Bruce, one full of happiness and family. When Alfred faces the facts about Bruce, he has to tell Julie the best way to describe Mr. Wayne – “He’s spoken for.” Talking about hitting the target with just a few words.

Snyder continues to show his deep grasp of Bruce Wayne and those around him, including Gordon, Fox and Alfred. Just great!

Oh, and there’s a wonderful explanation about the origin of the question mark, the Riddler’s emblem, as well. I do love it when I learn something while reading a favorite comic!

BOTTOM LINE: THIS ‘ZERO YEAR’ EVENT WILL BE A CLASSIC

Tackling and updating Batman’s origin had to be a daunting experience. For decades, fans have been used to just one way to view how he became a hero.

Now that “Zero Year” has concluded, I think today’s fans have been given the gift of a great story that makes Batman’s beginning something so special we’ll be referring back to it for years, probably decades to come.

The fact that this excellent book came out on Batman Day made it a celebration for all of us, both DC and Bat-fans alike.

I can’t wait until the next story starts in August! I think it’ll continue to keep Batman as the top-selling comic each month, so I highly recommend you don’t miss it!