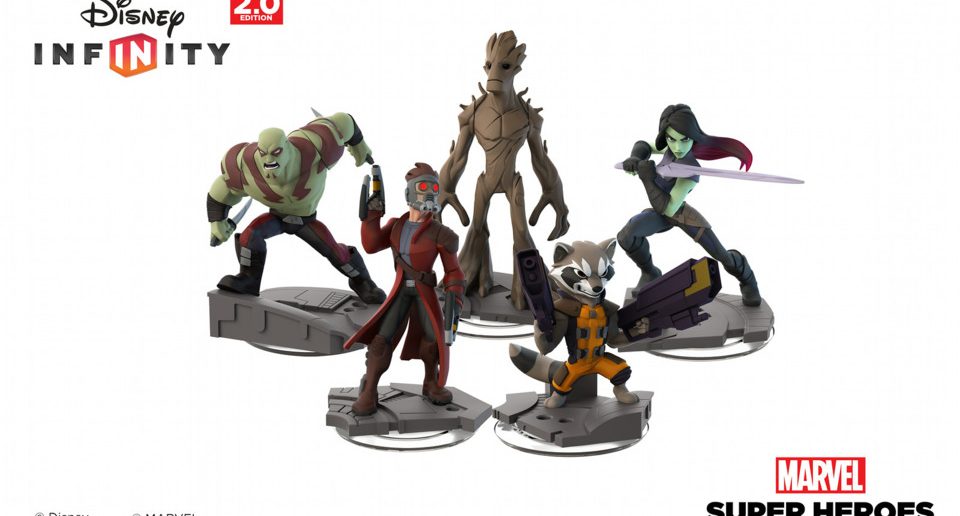 Over the next couple of months I expect Disney to overload us with announcements of characters coming to the Disney Infinity 2.0 set.  We already know of the Avengers and Spider-Man, today we have found out that Guardians of the Galaxy will get the cutesy game treatment. Here’s what the press release has to say:

Playable characters for the Play Set include Star-Lord, Rocket Raccoon, Drax, Gamora and Groot, as well as crossover characters Iron Man (from The Avengers Play Set) and Nova (from The Spider-Man Play Set). Mission givers will include Cosmo, The Collector and Yondu.

Star-Lord, Rocket Raccoon, Drax, Gamora and Groot will be also playable in the all-new Toy Box 2.0, along with all characters previously released for Disney Infinity. Players will be able to use these characters, plus hundreds of Marvel and Disney-themed items, locations, props and vehicles to create new adventures in customized worlds. Additionally, the Guardians of the Galaxy characters will partake in one of the new structured Toy Box Games now offered in Disney Infinity: Marvel Super Heroes. The Toy Box Game, called Attack on Asgard has Loki opening a series of portals that allow an army of Frost Giants to invade Odin’s Palace at Loki’s command. The Giants threaten to lay waste to Asgard, rob Odin’s Palace and ultimately grant control of the throne to Loki.

In addition, there will be Guardians of the Galaxy themed Power Discs that will enable players to customize their Play Set and Toy Box experiences. The Power Discs include:

o Space Armor – Unlock Gamora’s out of this world Space Armor costume for added protection against enemies. Who says fashion can’t be functional too?

The Guardians of the Galaxy Play Set will be available in retail stores this fall. Additional characters will be announced in the coming months. Disney Infinity: Marvel Super Heroes is being developed by Avalanche Software and is rated E-10+ by the ESRB.

And here is the lineup so far:

Man… my wallet is going to be even more empty than before once my kids see these pictures.