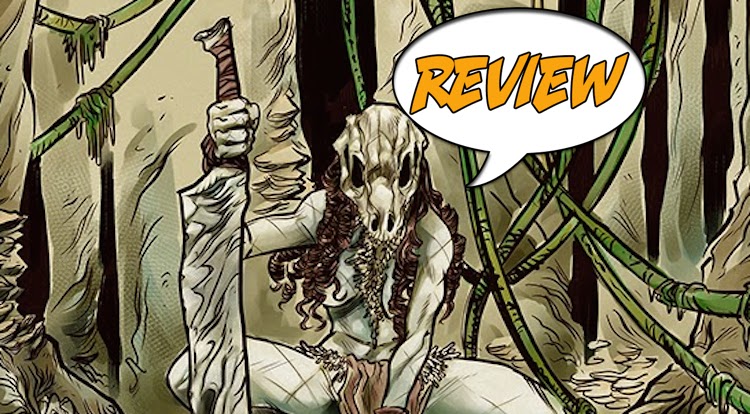 Dark Engine is a sword and sorcery fantasy comic, taking place in a world of demons and dinosaurs.  It’s also a comic with many firsts.  Just what are those firsts?  Read the review to find out. Previously in Dark Engine: Sym is a savage woman created by alchemists using some dark machine.  There are dinosaurs and demons that are going to get killed.

SO, WHAT THE F@!K JUST HAPPENED?

I’ve never been a fan of fantasy Conan type stories.  After reading Dark Engine #1, I don’t think I’ll be reading more any time soon.  I wish I could describe what occurs but there is so little description and dialogue that I’m not sure I even know.  We see Sym born by exploding out the stomach of a dinosaur.  She hacks it up for meat and uses its bones for armor and weapons.  She then urinates on panel, which is a first for comics I believe, kills some dinosaurs before giving birth to, and ripped apart by giant tentacles.  At the end she explodes out of a hippopotamus, again, probably a first.

If that sounds bizarre, believe me, it’s more bizarre than that.  There is some dialogue between two men about a machine that made Sym, but it’s so cryptic and poorly written that it only adds to the confusion.  Ryan Burton’s prose style is partly to blame.  He clearly wants John Bivens’ art to do the work but more description on where characters are would go a long way in helping the reader.  I imagine the script for the issue was little more than descriptions of action scenes.  There are things depicted that are almost offensive, and I don’t offend easily (if at all).  Seeing a woman squat to pee is has no point in the story and I would have preferred not to see.  Dark Engine is an incredibly violent book as well.  Gore flies everywhere as Sym hacks apart creatures.  When the tentacles rip her apart they come out of every orifice and it is all depicted graphically (yet another first).  Even after reading the issue four times, I cannot tell you exactly what is happening or why.

SERIOUSLY, WHAT THE F@!K JUST HAPPENED?

I’d like to say that John Bivens’ art helps the story and elevates the issue but unfortunately I can’t.  His style fits with the setting but the wavy lines used amount of things packed into the panels leads to more head scratching.  Action is poorly laid out and is extremely difficult to understand.  It’s so complicated that it led me to have a discussion as to whether the tentacles came out of Sym or raped her.  That’s not a conversation that I needed to have.  Color is muddy and has the appearance of being smeared on the page.  Much like the story, disappointing and frustrating all around.

I cannot recommend Dark Engine #1 in any way.  It certainly isn’t worth a buy and I’m not sure even worth reading.  Sym’s a strong female character but the issue is insanely confusing and one giant, violent fight between a woman and dinosaurs.  If you want to see a character pee and living things ripped apart by various means, this might be the book for you.  I don’t have interest in reading fantasy stories and Dark Engine did nothing to change that.  It might have turned me off more.