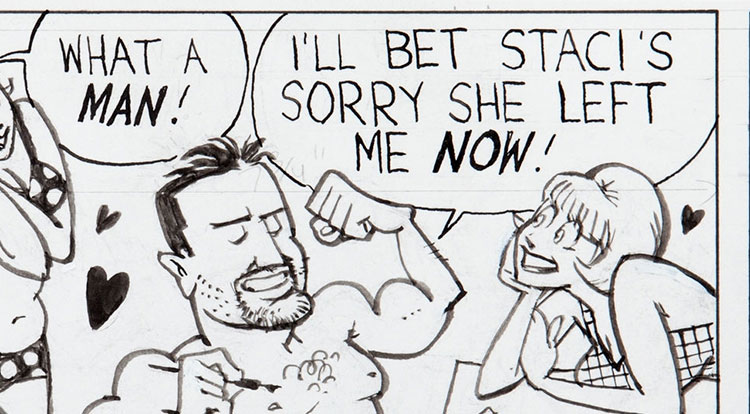 The original artwork for the recent three comic strip collaboration between Bill Watterson, the reclusive genius behind the much-loved Calvin and Hobbes comic strip, and Pearls Before Swine cartoonist Stephen Pastis – taking place in a three day run in June 2014 in Pearls – will be sold at Heritage Auctions on Aug. 8, 2014, with proceeds from the sale benefitting The Michael J. Fox Foundation for Parkinson’s Research.

All three comic strips will be on display through Sunday, July 27, 2014, at San Diego ComicCon.

“Anytime original Bill Watterson comic art shows up for auction it’s a big deal,” said Todd Hignite, Vice President at Heritage Auctions. “His collaboration with Stephan Pastis was an unexpected treat for his millions of fans. Now, thanks to this auction, fans will get to take the original art home while raising money for a great cause.”

The collaboration between the two artists came at the suggestion of Watterson and was immediately embraced by an overwhelmed Pastis, who, like some many modern cartoonists, was greatly influenced by Watterson and Calvin and Hobbes. The trajectory of the three strip arc follows Pastis’ comic strip alter-ego as he turns the drawing of the comic over to a precocious second-grader named Libby for three days. The results are both wickedly funny and uniquely Watterson, while remaining true to the sharp humor that defines the Pearls Before Swine strip.

At Watterson’s request, the artwork is being sold on behalf of Team Cul de Sac, a non-profit charity established by editor/designer Chris Sparks on behalf of  Cul de Sac cartoonist Richard Thompson, who is battling Parkinson’s Disease – a piece of artwork done by Watterson depicting one of Thompson’s Cul de Sac characters sold in 2012 as part of a charity auction to benefit Team Cul de Sac – and the profits from the sale of the original art (Heritage is waiving the seller’s fee on the artwork and will also contribute half of the Buyer’s Premium) will be donated to the Michael J. Fox Foundation for Parkinson’s Research.

Heritage Auctions is the largest auction house founded in the United States and the world’s third largest, with annual sales of more than $900million, and 850,000+ online bidder members. For more information about Heritage Auctions, and to join and receive access to a complete record of prices realized, with full-color, enlargeable photos of each lot, please visit HA.com.