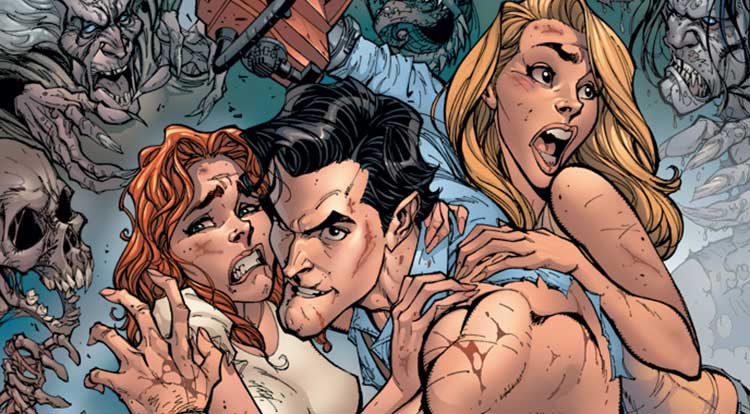 Dynamite Entertainment is inviting fans everywhere to join the celebration with a very special Army of Darkness tale, dedicated by its issue number to honor the year of the original cult film’s release. Army of Darkness #1992.1 will be a commemorative square-bound edition, featuring short stories of demon-hunting hero Ash Williams written by the series’ greatest terror talents of issues past, including Steve Niles, Elliott Serrano, Cullen Bunn, James Kuhoric, and Mike Raicht.

Army of Darkness #1992.1 celebrates the history of Dynamite’s publishing by inviting many of its most notable writers to contribute short vignettes. Steve Niles (30 Days of Night) is the most recent contributor to the saga, with tales of medieval terror in Ash and the Army of Darkness and Army of Darkness: Ash Gets Hitched. Elliott Seranno contributed such story arcs as “Hail to the Queen, Baby” and “The King is Dead.” James Kuhoric (Six Million Dollar Man: Season 6) wrote some of the earliest Dynamite adventures, including “Shop ‘Til You Drop Dead” and “Army of Darkness Vs. Reanimator.” Mike Raicht (Dark Shadows) contributed the storylines “Hellbillies and Deadnecks” and “Home Sweet Hell.”

Meanwhile, Cullen Bunn is a celebrated comic book author (Deadpool, Magneto, Sixth Gun) tackling Army of Darkness for the first time, and setting up its hero for the next adventure. As Senior Editor Joseph Rybandt says, “Army of Darkness will always have a special place in our collective hearts, as ten years ago, it was our very first title. We’ve thrown everything at Ash in the interim, but we’re throwing him into space next. And it all starts here.”

“I’m proud to be a part of this incredible celebration, but truth be told, they couldn’t have done it without me,” says Ashley J. Williams, star of the movie and comics. “When they suggested the #1992.1 comic, I said, ‘Why, that’s the highest numbered comic of all time. That sounds great!’ They stated that another company had done a #One Million, and shotgun in hand, I explained to them how that was a stunt and this is the real deal, so all I can say is… buy it! You’ll love it.”

“What better way to celebrate the 10th anniversary of Dynamite than with an incredible oversized Army of Darkness story,” says Nick Barrucci, CEO and Publisher of Dynamite Entertainment. “This special is in time for our 10th anniversary and serves as a holiday present to our fans! Comics and movie fans alike will not want to miss this issue.” Army of Darkness is a 1992 fantasy/comedy film with strong horror elements starring Bruce Campbell (Burn Notice) and Embeth Davidtz, the third installment in a trilogy featuring reluctant hero Ash Williams. Directed by Sam Raimi (Spider-Man), the film saw its tough-as-nails, wise-cracking protagonist transported from the modern era to the Dark Ages in his continuing war against demonic evil. Army of Darkness generated a dedicated fan following for its premise and lead actor.

Dynamite, Mount Laurel, New Jersey. 23,709 likes · 220 talking about this. The official Facebook for DYNAMITE ENTERTAINMENT, home to some of the best-selling comic book titles and properties in the…