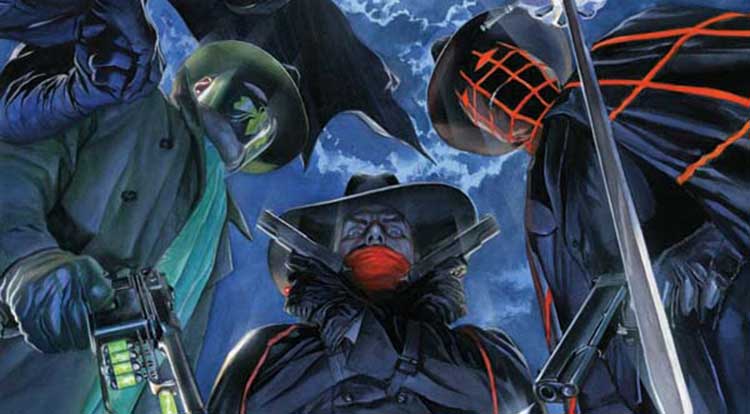 Dynamite Entertainment is proud to announce that comic book writer Cullen Bunn (Deadpool, Magneto) will tackle their wide cast of company-owned and licensed pulp heroes in Masks II. Following upon the success of the bestselling 2012 Masks miniseries, Masks II will unite iconic crime-fighters of singular purpose (if not diverse ideologies and techniques) in an epic miniseries event designed to appeal to both longtime fans and fresh newcomers. Dynamite plans to launch Masks II in late 2014.

“I couldn’t be more excited to be working on Masks II,” says Bunn. “I’ve always loved these great classic characters that I will have the privilege of working with, and I’m striving to keep the tone of the pulps that have always been a big inspiration for me. I’ll admit, this project is a little intimidating, because I’ve put together a very ambitious team-up story that readers will have to see to believe!”

The original Masks series launched in 2012 with industry fanfare, with its #1 issue ranking among the bestselling independent comic books of the year and selling over 70,000 copies. Drawn to the premise by the work of superstar painter Alex Ross, writer Chris Roberson, and artist Dennis Calero, readers thrilled to an adventure that united classic characters like The Shadow, The Spider, The Green Hornet, and Kato against a cadre of corrupt politicians and their fascist police state. Masks II promises to follow the themes established within that first series, but in a way that’s perfect for new readers.

Bunn recently released his debut work with Dynamite Entertainment, a standalone tale presented in The Shadow #0 that teamed the supernatural vigilante with legendary escape artist Harry Houdini. Masks II marks his first foray into the long-form comic story for Dynamite.

Cullen Bunn is a freelance writer perhaps best known for Marvel Comics’ popular Deadpool Kills the Marvel Universe and Magneto series, as well as the Oni Press series The Damned and The Sixth Gun. He is also a short story writer and novelist; his major publications outside of the comic book sphere include Crooked Hills and Creeping Stones & Other Stories. He has been nominated for the Bram Stoker Award (2012), the Eisner Award (2012), and the Ghastly Awards (2011), and is the winner of Broken Frontier’s “Best Writer Independent” Award (2011).

“Since Day One we’ve strived to deliver high-octane action on Masks,” said Nick Barrucci, CEO and Publisher of Dynamite Entertainment. “The fresh style that Cullen brings to comics is exactly what makes him the perfect choice to fit the bill. He’s our absolute top choice for a project of this caliber!” Masks II will be solicited in an upcoming release of Diamond Comic Distributors’ Previews catalog, the premiere source of merchandise for the comic book specialty market. Comic book fans are encouraged to reserve copies of Masks II with their local comic book retailers. Masks II will also be available for individual customer purchase through digital platforms courtesy of Comixology, iVerse, and Dark Horse Digital.

Dynamite, Mount Laurel, New Jersey. 23,710 likes · 226 talking about this. The official Facebook for DYNAMITE ENTERTAINMENT, home to some of the best-selling comic book titles and properties in the…