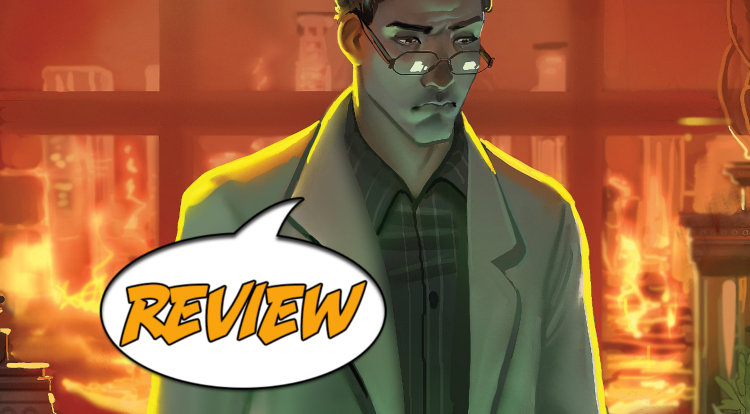 Doctor Dan Miller struggles to do deal with the public and private reactions to the rapid spread of genetically modified dandelion seeds across Los Angeles before things get so much worse than they already are.

In the wake of the rampant spread of genetically modified dandelion seeds across the great Los Angeles area (which, if readers know Los Angeles at all, writer Matt Hawkins drops many well-known neighbourhoods and landmarks throughout Wildfire #2), Dr. Dan Miller is forced to deal with the meltdown of his own company, BioGenesis disavowal of their association, his sister’s disdain and a flood of death threats all before Los Angeles catches on fire as readers saw at the beginning of the first issue.

It’s a lot to tackle in 22 pages, but Matt Hawkins paces the reveals throughout Wildifre #2 very well and readers are never left with the sense that they’ve had too much thrown at them. He does a good job of confining Dan to his lab – as represented by Agent Mark Chen head of a joint task force – without falling on jerk-y agent stereotypes. Every character we see throughout Wildfire #2 be it: Dan, Mark Chen, Dr. Silva or even the reappearing news anchor Michelle Crawford are just doing their job in this time of crisis. That is part of the genius of Wildfire #2 (and the series, thus far, as a whole), there is no villain. These are characters who believe in what they do, reacting to an insane and dangerous event and trying to keep a Pandora’s Box situation from taking place.

Dan is the obvious focal point – if not, by strictest definition the protagonist – of Wildfire #2 and the character whose personal life readers are given the most insight into. Almost every other character ties back to him in some way and he is the characters readers will most identify with. It’s frustrating to have him confined throughout the majority of the issue, unable to use his expertise to be helpful just because of an accident that leads back to an experiment undertaken by the company he is in the employ of.

In Wildfire #2 Hawkins tackles a big issue presently facing not only our society, but our entire world without preaching one viewpoint above all others. It’s clear that he’s done a tremendous amount of research on the subject of genetically modified organisms (with dandelions as the catalyst for the events of Wildfire #2), and, thus, is able to have his experts sound like experts without resorting to techno-babble while at the same time not overwhelming the reader with an exposition dump every few pages.

With every page Wildfire #2 up the danger, and thereby the stakes, until the characters are readers are presented with what could possibly be an apocalyptic circumstance. Wildfire #2 is a very interesting issue that promises to have a lot of payoff in future issues.

Artist Linda Sejic is also credited as co-creator of the Wildfire series and I’m certainly has strong ideas for each of the characters in her mind. She has a nice, feminine (in a completely unquantifiable way), art style and each character is sufficiently distinct. There is, however, something about her style that comes across a Disney – it might be the eyes, or how polished the final colours are, but that inherently sweet quality in her artwork seems at odds with the narrative and subject matter in Wildfire #2.

It’s an odd critique to make because her women are beautiful, the men, for the most part, are handsome, there is variety in her character designs and all the actual locations across Los Angeles look like the those places and they are executed with a distinctive, clean style.

Linda Sejic does a great job across the board in Wildfire #2, in spite of the fact that the subject matter seems to want a sketchier aesthetic.

Yes, you will have to read every issue in this series in order to appreciate the full weight of the events taking place. Yes, it’s still early in the series. Yes, you can go out and get Wildfire #2 right now and you really, really should.