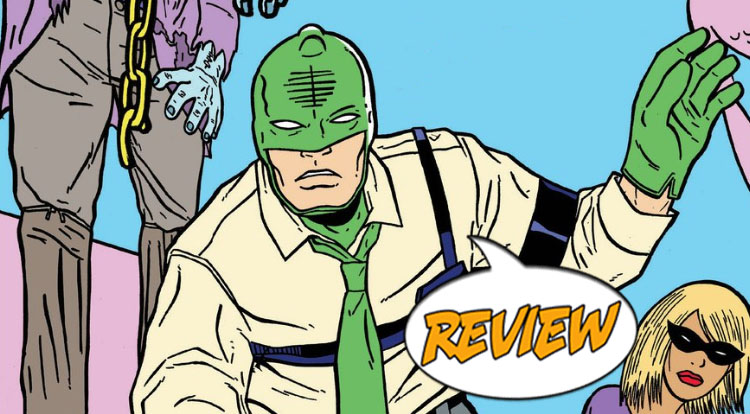 Psychedelic two-fisted adventures in a Silver Age vein, and things are about to get serious!  Your Major Spoilers review of Cap’n Dinosaur #1 awaits! CAP’N DINOSAUR #1
Writer: Kek-W
Artist: Shaky Kane
Publisher: Image Comics
Cover Price: $3.99
Previously in Cap’n Dinosaur: Shaky Kane got his start in British comics with 2000 AD and Judge Dredd, but is probably best known for his work on The Bulletproof Coffin, which played with the history and meta-textuality of comic books to tell a story inspired by Earth-Prime and other Silver Age lunacy.  The solicits for this issue? “When a mysterious drowned man falls out of the clear blue sky, The Cap’n and Honey Moon follow a trail which leads them to a deserted Amusement park. Writer KEK-W (2000 AD, Ruddy Rucker’s Flurb) and THE BULLETPROOF COFFIN’s SHAKY KANE take the law into their own hands in this two-fisted tale of Murder, Muscle Marys, and Mail-order Mystery. WARNING: Contains Pop Culture references and Impact wounds.”

Do you think we’re going retro?

When a man falls out of the clear-blue sky, it’s weird.  When his actual cause of death is drowning due to water-filled lungs, it’s a job for Cap’n Dinosaur and Honey Moon, super-hero investigators!  This issue opens with the dead body falling to the pavement as a Maguffin, but immediately transitions into insanity, as Cap’n and Honey quickly discover a clue and make their way to the nearby amusement park, Phoney Island.  The bulk of the issue is taken up with battle, as Swami Midnite and his Carnevil of Crime try their darndest to take down hero and partner.  Honey’s power set is drawn from the phases of the moon, which naturally are used to make some tongue-in-cheek references to the female menstrual cycle, while Cap’n Dinosaur himself channels the raw power of his lizard-brain to override the Swami’s evil mind-control.  By the time the Frankensteins start showing up, the issue has moved fully into surrealism, as each page trots out another new twist on ancient comics lore and tradition.

When Cap finds himself in pain due to the bites from a swarm of flea-sized Frankensteins, but combats them by lighting his own shirt on fire, the issue has me solidly in its camp.  Shaky Kane’s ‘Herb Trimpe-aping-Jack Kirby’ art-style is pretty unique, and while it’s a bit more primitive, it reminds me somewhat of Allred’s work on FF and Silver Surfer.  The main difference here is in the tale being told, as “Kek-W” (if that is her real name) is willing to throw pretty much any concept at the wall to see if it sticks.  A Soviet cyborg called Citizen Sputnik using Sea Monkeys as slave labor to build nuclear submarines and attack the west? SURE!  A wolfman named Jack?  SURE!  The issue ends with Cap’n Dinosaur in the bath, relaxing and awaiting the next call to action, and the issue serves as a distillation of Silver Age tropes and extrapolations into one place, serving both as celebration and deconstruction of the comics of the 50s and 60s.

The end of the story comes as the proverbial short, sharp shock, ending with little more than a few punches from our unstoppable heroes, but that’s almost certainly part of the joke here.  Kane’s art feels like classic Marvel (or, to be honest, Marvel knockoffs like Radio Comics), but it’s a bit ill-served by the coloring, which is both too intense and too pastel for my tastes.  A little more orange and brown, to ape the color of aged pages would have made me happier, but overall it’s still a good-looking package.  Cap’n Dinosaur #1 isn’t for everyone, certainly, but has its charms in story and art, with a keen ear for replicating and amplifying the madness of comic books past, earning 3 out of 5 stars overall.  I do like this issue, though one can see why it’s a one-shot and not the first part of an ongoing series…