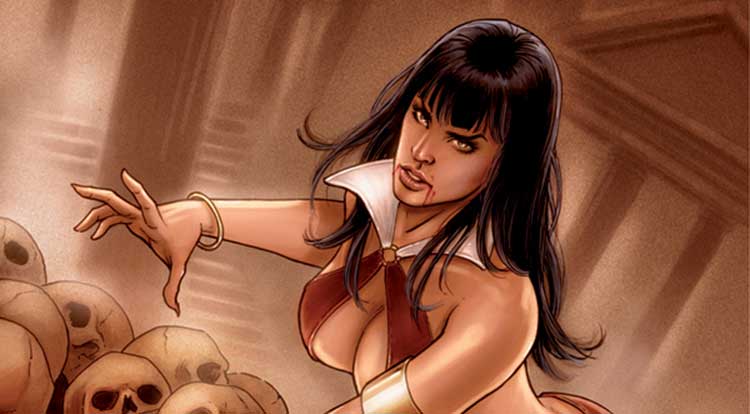 “Seeing as this is the 45th anniversary of Vampirella‘s creation, Dynamite has decided to mark the occasion by taking her back to her roots,” says writer Nancy A. Collins.  “We’ve got some of the best writers in comics slated to deliver the short, sharp shocks that the Warren magazines were famous for.  I am both excited and humbled that these incredibly talented creators have signed on to celebrate Vampirella’s birthday.”

Nancy A. Collins, the bestselling author renowned for her horror fiction in comics (Swamp Thing) and novels (Sunglasses After Dark, VAMPS), assembled a team of today’s most accomplished writers to contribute “twisted tales, bizarre bedtime stories, and fearsome fables” in the tradition of the classic Warren Vampirella magazine publications.  In Feary Tales, a dimensional rift traps Vampirella in an alternate dimension where an enigmatic Storyteller forces her to live out classic tales of terror and whimsy, providing the context for a wealth of creative interpretations of the beloved character.

“Today’s comic book fans still recognize Vampirella, but many don’t realize that she wasn’t just a fanged and buxom adventuress,” says author Nancy A. Collins.  “Like her fellow Warren Publications horror hosts, Vampirella served as ‘ghostess with the mostest’, lacing her introductions to the various stories that graced her black-and-white magazine with puns and double entendres.”

Devin Grayson (comic book writer of Nightwing, Batman: Gotham Knights, and Titans) and John Shirley (award-winning horror and science fiction author, and screenwriter for the 1994 cult classic film, The Crow) join Collins on Vampirella: Feary Tales #1.  In the debut issue, Vampirella is surprised to discover herself married to an infamous wife-killer in “Bluebeard’s Blood” (penned by Grayson), and then finds herself both the belle and the bête of the ball in “Cinderella? Vampirella!” (by Shirley).  Artists on issue #1 include Jack Jadson, Ronilson Freire, and Elmo Eklabuz. “We first started working with Nancy when she was a part of the Legends of Red Sonja series that Gail Simone oversaw with Joe Rybandt – an incredible event celebrating Sonja‘s 40th Anniversary.  When Nancy took over as the writer of the new Vampirella series, she asked if she could do the same Legends-style concept for Vampirella‘s 45th Anniversary.  How could we say no?  Nancy has brought her ‘A’ game, and has brought together an all-star line-up of writers to help celebrate the occasion.  Feary Tales is an incredible series with fantastic writers, and the diversity of its creative voices will bring new audiences to our femme fatale,” says Dynamite CEO/Publisher Nick Barrucci.

Dynamite will celebrate the new Vampirella: Feary Tales #1 with a variety of cover options, including a Main cover by Jay Anacleto (Warlord of Mars); Variant covers by Joe Jusko, Art Adams, and Fabiano Neves; and a “Warren Years Homage” Subscription cover by David Roach reserved for those hardcore fans who place preorders with their local comic retailers.