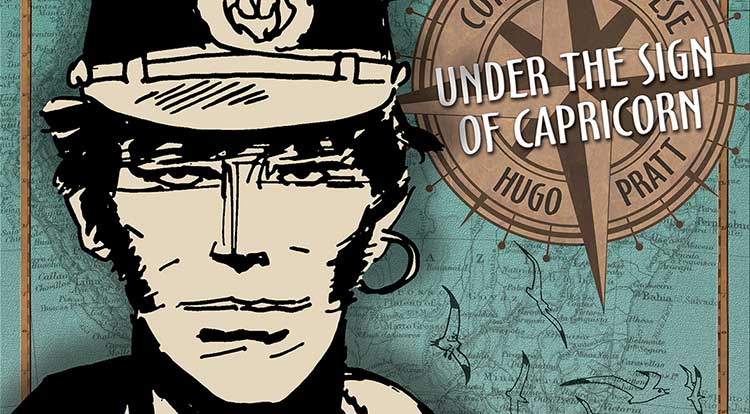 Long before the term “graphic novel” entered the popular lexicon, the Italian cartoonist Hugo Pratt pioneered the long-form “drawn literature” story in 1967 when he introduced Corto Maltese in the epic adventure “The Ballad of the Salty Sea.” Pratt set the standard for all adult adventure comics in Europe, and by the mid-1970s Corto was the continent’s most popular series and Pratt the world’s leading graphic novelist. “He is one of the true masters of comic art,” says Frank Miller.

Pratt’s books remain best sellers in Europe and are published in a dozen languages yet until now, Corto Maltese has been poorly represented in English.

“We intend to change all that,” says EuroComics editor Dean Mullaney. “Pratt deserves a first-rate American edition and America deserves Corto Maltese. We’re proud to publish Hugo Pratt as the first graphic novelist in our EuroComics imprint; we’re similarly pleased to publish him alongside Milton Caniff and Alex Toth, two important artistic influences on Pratt, from our long-standing Library of American Comics line.”

The late Kim Thompson, best known as the Vice President and Co-Publisher of Fantagraphics Books, summed up the Pratt’s historical importance: “Corto Maltese was the first European strip to advance a mature, artistically serious sensibility within the traditional adventure format. The elliptical narrative of the stories, the pervasive sense of destiny and tragedy, the side trips into the worlds of dreams and magic—all capped off with the exotic, guarded nature of the hero—combined with Pratt’s hard-won craft, worldly experience, and scrupulous research to form a work of breathtaking scope and power.”

EuroComics is working closely with Patrizia Zanotti, Pratt’s long-time collaborator, to present the complete Corto Maltese in a series of twelve quality trade paperbacks in Pratt’s original oversized black and white format. They will also feature new translations from Pratt’s original Italian scripts by Simone Castaldi, Associate Professor of Romance Languages and Literatures at Hofstra (and author of Drawn and Dangerous: Italian Comics of the 1970s and 1980s), and Mullaney.

“At long last, Hugo Pratt’s masterpiece washes up on American shores the way it was intended to be seen and read, the way fans all over the world have known and loved it for decades,” said Eisner Award winner Matt Fraction. “I read my first Corto Maltese story when I was ten years old and, ever since, this was the version of Corto I’ve wanted on my shelves. ”

The first of the twelve volumes, Corto Maltese: Under the Sign of Capricorn, to be published December 2014, collects the first six inter-connected short stories Pratt created in France in the early 1970s: “The Secret of Tristan Bantam,” “Rendez-vous in Bahia,” “Sureshot Samba,” “The Brazilian Eagle,” “So Much for Gentlemen of Fortune,” and “The Seagull’s Fault.”

The second volume, collecting the subsequent five stories, and will be released Spring 2015.

The series will also be released in a matched set of six original art-sized limited edition hardcovers, each containing the equivalent of two of the trade paperbacks.