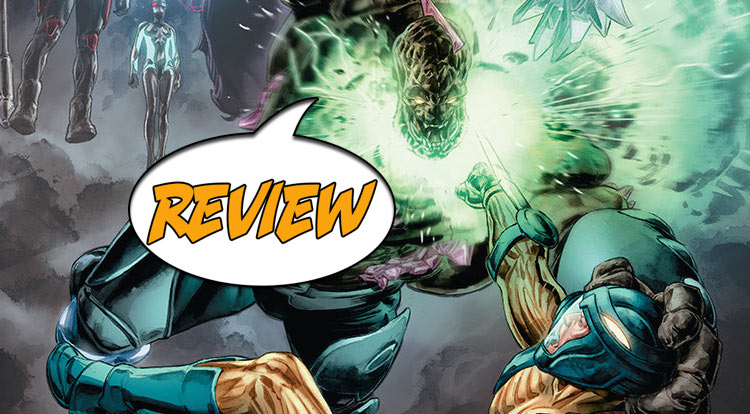 Over the last year or so the Valiant Universe has expanded while also tying titles together.  There was the Harbinger Wars, then the Archer and Armstrong crossover with Bloodshot.  Now we have Armor Hunters, an event focusing on X-O Manowar.  Last issue ended with a literal bang but does this one up the ante?  Read on to find out!

Previously in Armor Hunters: An alien group called the Armor Hunters arrived on earth.  Their goal is to find the X-O Manowar armor and destroy it.  After finding that there are copies the Armor Hunters contact the U.S. government and Aric (X-O Manowar).  When Aric refuses to give the armor up, the Hunters destroy Mexico City in seconds.

SACRIFICE THE WORLD TO SAVE THE UNIVERSE

After the shocking ending of last issue, I wasn’t sure where Armor Hunters would go next.  Killing the entire population of Mexico City is a major deal and credit must be given to Mr. Venditti for pulling it off.  The Armor Hunters are a genuine threat and, as with all good villains, believe they are doing good.  It’s revealed that the X-O Armor is an infection of sorts and uses its hosts to replicate itself.  It was a good twist and lends understanding to the Hunters.  Every world they’ve encountered has resisted rather than sacrificing for the survival of the universe.  Even though the majority of the issue is talking, Venditti holds tension well.  The U.S. can’t make a move for fear of retaliation and don’t want to give the Hunters the most powerful weapon in the world.  When action does happen it’s unfortunately too brief.  With the first issue having such big moments, this one was somewhat of a letdown.  After a great setup, there’s little that happens other than moving more pieces into place.  It’s clearly to set up the other title’s crossover issues but feels like a waste of space.  The tone is dark with death, dissections and destruction taking place throughout.  It’s not the summer blockbuster feel that usually comes with events like this and could turn some readers away.  Armor Hunters is still going strong but the pace needs to pick up and with Bloodshot appearing at the end, it looks like it could.

REALISTIC BODY PROPORTIONS IN A COMIC?

Doug Braithwaite is a strong artist all around.  His detail is excellent and panel layouts allow the art to breathe.  The best aspect is the fact that body sizes and proportions actually look realistic.  Women’s busts aren’t gigantic back breakers and men aren’t ‘roided out.  Braithwaite draws the best Bloodshot I’ve seen, making him muscular yet lean.  It’s a refreshing take from the giant he’s been portrayed as before.  Braithwaite handles the devastation well with the opening scene in Mexico City looking as shocking and depressing as it should.  There are moments where backgrounds drop out and an odd panel with a floating head, but otherwise it’s solid work.

BOTTOM LINE: IF THE HEAT PICKS UP, I’M STAYING

Armor Hunters #2 is clearly continuing to set pieces up for the event and tie-ins.  It’s not a boring read at all, with tension present throughout and solid artwork as well.  The action is too short but it looks like things will pick up next issue.  If Venditti makes it as devastating as the first issue’s conclusion, this will have a major effect on the Valiant Universe.