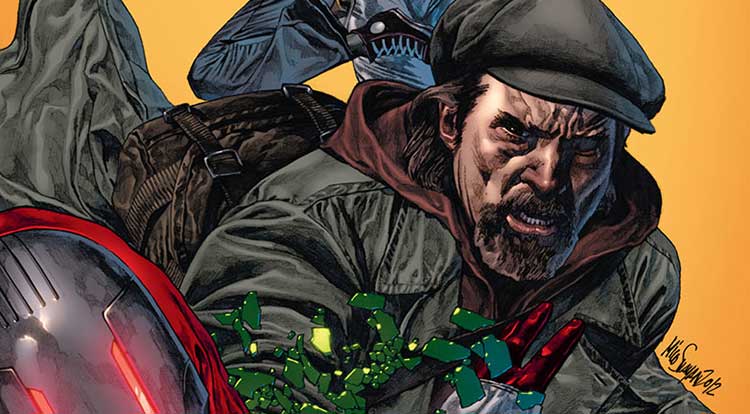 Archer and Armstrong headed to the big screen

As revealed exclusively at the Hollywood Reporter, New York-based comic book publisher Valiant Entertainment today announced that they are adapting their award-winning comic book series, ARCHER & ARMSTRONG, into a feature film. Valiant has partnered with the Sean Daniel Company (THE MUMMY, BEST MAN HOLIDAY, MGM’s upcoming BEN-HUR) for the production and has funded a script from writer BenDavid Grabinski. The film will be produced by Sean Daniel, Jason Brown, and Dinesh Shamdasani.

ARCHER & ARMSTRONG is an action-adventure/buddy comedy colliding a drunk, delinquent immortal who has given up on saving the world and the idealistic young man who needs him for a globetrotting quest to stop history’s oldest conspiracy from toppling modern civilization.

Co-created by former Marvel Comics Editor-in-Chief Jim Shooter (AVENGERS), and legendary comics creators Barry Windsor-Smith (CONAN) and Bob Layton (IRON MAN), Archer & Armstrong first appeared in 1992 and quickly became one of the most successful comic book franchises in history, selling more than 4.5 million copies worldwide. With a devoted following that stretches around the globe, Ain’t It Cool News has called Archer & Armstrong “the best buddy team book of all time,” adding that “not since Batman & Robin has a more important duo hit the comic world.”

“ARCHER & ARMSTRONG is one of the greatest untapped franchises in comics, and BenDavid’s script is delivering a vision for these characters that has made us all very, very excited,” said Sean Daniel. “The movie is about the relationship between these two amazing characters, the comic clash between optimism and pessimism, and how family is the most important unifier. It combines globe-spanning action with BenDavid’s singular sense of humor, and is rooted in resonant themes that give it a powerful emotional core.”

Founded in 1989, Valiant experienced a meteoric rise in the 1990s, selling 80 million comic books and quickly becoming the number three publisher in the comic book industry. One of the few companies to ever rival Marvel and DC in popularity and market share, Valiant re-launched its universe of characters to tremendous commercial and critical success in 2012. The company previously announced that SHADOWMAN, another award-winning franchise from Valiant’s library of more than 1,750 comic book characters, was being adapted into a feature film. Screenwriter J. Michael Straczynski (THOR, WORLD WAR Z, and the upcoming SENSE8 for Netflix) has been hired to adapt SHADOWMAN with Valiant funding and producing alongside the Sean Daniel Company. Additionally, BLOODSHOT – another Valiant property with sales in excess of 7 million copies to date – has been optioned by Sony Pictures with Matthew Vaughn (X-MEN: FIRST CLASS) attached and a script by Jeff Wadlow (KICK-ASS 2). Valiant has partnered with Original Film for the project. Neal Moritz, Toby Jaffe and Dinesh Shamdasani are producing.

BenDavid Grabinski, writer of SKIPTRACE with Jackie Chan and Seann William Scott starring, also previously wrote an untitled project for Peter Berg (LONE SURVIVOR), as well as CON ED for Alcon Entertainment; SWIFT for Sony Pictures; and THE HOW-TO GUIDE FOR SAVING THE WORLD for MGM with Barry Sonnenfeld (MEN IN BLACK) directing, which was featured on the Black List.

ARCHER & ARMSTRONG joins a highly anticipated slate of upcoming feature film and television projects at the Sean Daniel Company, including THE MUMMY reboot for Universal in 2016, BEN-HUR for Paramount/MGM with director Timur Bekmambetov (WANTED) also in 2016, and THE EXPANSE, which received a straight-to-series commitment from the Syfy channel and is based on the New York Times bestselling series of novels by James S.A. Corey.

“We couldn’t have more apt partners than Sean Daniel – who, as an executive at Universal, shepherded the seminal movies in the genre in BLUES BROTHERS, MIDNIGHT RUN, and ANIMAL HOUSE – and BenDavid Grabinski, who just turned in a truly awesome adaptation,” said Valiant CEO & Chief Creative Officer Dinesh Shamdasani. “We’re bringing the same quality and creativity that established our success in comics to our film and television adaptations. SHADOWMAN, BLOODSHOT, and ARCHER & ARMSTRONG are just the beginning.”