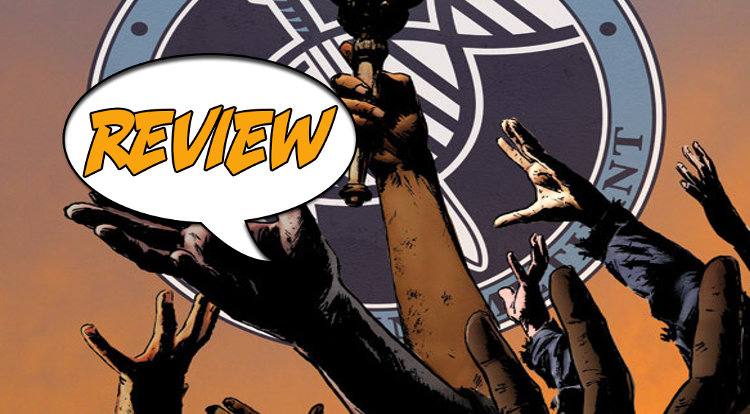 Choices for the Lift have to be made – will Michael and Casey meet the strict requirements? Forever continues to learn people’s true opinions of the family Carlyle. The first half of Lazarus #9 focuses on Forever Carlyle. Readers are rewarded with the scene of her success and her father’s decision that, even as a child, Forever is sufficiently trained and emotionally detached to function as the Carlyle family’s lazarus. Even in this flashback scene to Forever’s childhood writer Greg Rucka hints at the moral dilemma Forever faces in situations her father constructs with the intention of presenting her a black-and-white choice. He has already planted the seed of doubt in this young girl which is blossoming in her adult life into doubt of her family’s motives and action even as she carries them out.

Rucka shows a bit of his masterful hand with this move: Forever has made the cut by her father’s standards in the past, even as in the present young serfs Michael and Casey are ushered to the front of line to be tested (biologically, physically, mentally et al), to determine if they are worthy to – like Forever, despite her surname – to enter into the service of the family Carlyle.

As readers will probably expect, one of the teenagers fails the battery of utterly arbitrary tests they are presented with and expelled from the testing facility whilst the other sales on through to meet a member of the Carlyle family – Forever’s brother Stephen who seems to be the sibling with the least interest in the family affairs. However, Rucka – in a surprising move from past issues – does not leave any character in Lazaurs #9 with nothing. An attempted bombing of Stephen Carlyle allows a thwarted character to redeem themselves in a big way, not only to the reader, but in the eyes of the ruling Carlyle Family.

Lazarus #8 and Lazarus #9 have both revealed very little about the inner workings of Rucka’s world and the family Carlyle and while in many cases this could be viewed as frustrating, the development of Michael and Casey – these two serf characters – is compelling enough to keep dedicated readers of the series glued to the page. The tidbits that we are thrown about the greater rules and events appear to be leading to a payoff in coming issues and – assuming the aforementioned payoff does come to pass – Lazarus #9 is a fantastic middle-issue of a very interesting run.

Though I often suspect that the reason various issues of the Lazarus series have been late is Michael Lark’s pace, the wait is absolutely always worthwhile.

Lazarus #9, in particular, is a great looking issue. One of Lark’s great strengths as an artist is his ability to draw women who look like women without appearing as though they would blow over is a light breeze trundled into town. Forever Carlyle is her family’s protector and body guard and she has ever bit the appearance of someone who could handle herself again any and all potential assailants. Even Casey, still in her teenaged years, is slim and perpetually described as hungry, yet when she appears almost naked in a panel depicting a Carlyle medical examination she looks like a normal person.

Conversely, none of the men look like stretching the wrong way will rip every piece of clothing they sport open at the seams. Lark populates a stark, dirty world that reads as dangerous even from two feet off the page with true-to-life character designs that neither blend in nor distract too much from the world-building aspect of his art.

GET ON THIS BANDWAGON

Lazarus is a consistently great series from Image that goes for a mere $2.99 and Lazarus #9 is an especially stunning issue. There is a lot of action and character development for readers to sink their teeth into. This issue deserves all readers’ attention.