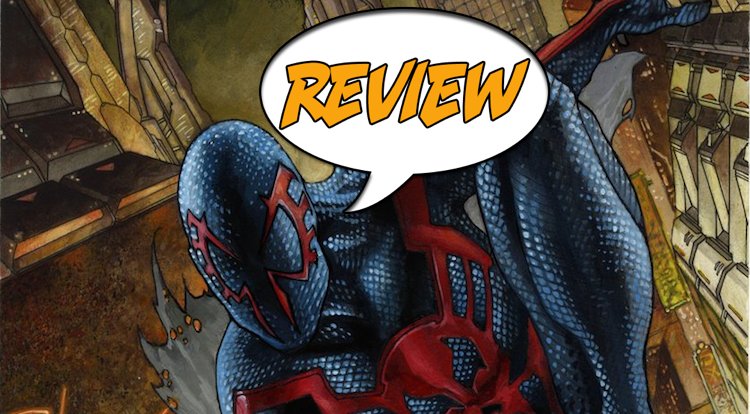 Because there aren’t enough Spider-Man books out, Marvel has given Spider-Man 2099 his own ongoing.  Of course, if he’s in present day wouldn’t he be Spider-Man 2014?  No matter, Major Spoilers has your review! Previously in Spider-Man 2099: Miguel O’Hara was the Spider-Man of the year 2099.  Recently, Miguel had to travel back to present day (2014) to stop the death of his grandfather and stopping the Superior Spider-Man (Doc Ock) from messing things up.  Unfortunately, even though he succeeded he got stuck in the present.  Confused?  Good.

IRRELEVANT TO THE FUTURE? I HOPE NOT

I enjoyed what I’ve read of Spider-Man 2099 and it’s nice to see Peter David handling the character again.  While I like that he’s gotten his own ongoing, I would rather have had it set in 2099.  The present day Spider-verse is getting crowded and adding time travel complications could muck it up.  Peter David does a fitting job setting up the series and there are already time issues, when a villain from the future comes to remove Spider-Man 2099 from our time for reasons that are unclear.  He also has the authority to erase those who are irrelevant to the future.  That’s a scary thought and was a nice touch.  Miguel has just settled into present day and working at Alchemax under a false name.  Already it’s looking like a possible headache but David is successful in not letting it get too confusing.  There’s some fighting after the set up and an interesting enough cliffhanger to bring people back.  It’s a simple story but not a rather interesting one either.  Other than time travel, my main complaint is the lack of new reader friendliness.  Those who haven’t read Amazing Spider-Man #1 (or the trailer issue as I like to call it) will be confused.  Characters are introduced that Spider-Man has already met and there is little explanation of who they are.  A simple “See issue X of Spider-Man” box would be a nice help, but those days have long passed.  I’m curious to see where this goes and what Peter David has in store but the issue’s story itself is a little bland.

If you haven’t seen Will Sliney’s art then prepare to be impressed.  I loved his work on Fearless Defenders (I’m still grieving its cancellation) and it has improved since.  He handles perspective shots wonderfully and every view of Spider-Man jumping through the city has unique angles.  Action is fluid and exciting plus the whole book has a grand scope.  Sliney does a brilliant job of blending his regular and digital work together.  There are very few moments where digital effects or lines are noticeable.  Even details down to shadows on Spider-Man’s mask that show some facial expressions are very cool, adding a nice touch of realism.  Antonio Fabela does good color work as well, using very few gradients and blending shades together smoothly.  The art is easily the best part of the book.

BOTTOM LINE: WHAT ELSE HAVE YOU GOT?

Spider-Man 2099 #1 is a decent but bland introduction to the series.  Plot is set up, there’s some punching, then a cliffhanger to entice readers to come back.  It’s simple, only somewhat effective and not new reader friendly.  Will Sliney and Antonio Fabel knock it out of the park on art duties which saves the book.  I’m interested in where Peter David will take it but another Spider title at $3.99 is hard to justify dropping cash on, especially if the story continues its current quality.  Worth a read at least…