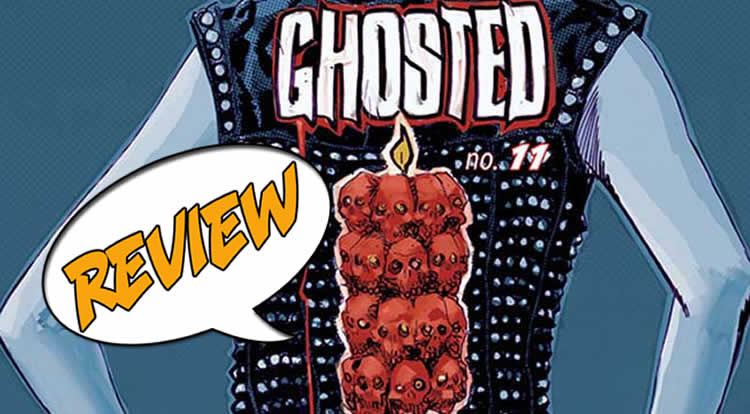 I always like to tell people the truth … that I’m really not that big of a horror fan. I enjoy it well enough, so don’t misunderstand. It’s just not the kind of story I enjoy reading most. (That’s a battle between superhero stuff and mysteries.)

This month, the creative team shakes things up a little by presenting a single-issue story focusing on a character I still enjoy … even though she’s dead.

Previously in GHOSTED:  “In death Anderson continues to haunt Jackson Winters, but in life she was far more terrifying! GORAN SUDZUKA returns to document this fan favorite’s secret history!”

THE WRITING CONTINUES TO BE SUPERB

Joshua Williamson continues to script this title, thankfully, and I adore edgy feel it’s had in the first two stories. Things move at a rapid pace or the drama ramps up while we’re learning more about the situation Jackson’s in. I’ve said it before, but it should be repeated – What makes Williamson such a terrific scripter is that he can adeptly handle many different kinds of storytelling (check out Dark Horse’s Captain Midnight, for instance), and this comic is no exception!

Now, for those who came in late, Anderson appeared in the very first arc, and she died (unexpectedly, in my opinion) there, but her ghost continues to be a part of the book.

Anderson is a butt-kicking female, something we need more of in comics, I think. This issue talks about how she came into the employ of Marcus Schrecken, a rich dude who puts a lot of us collectors to shame.

It’s tough to make a character shine even though she’s passed on, but Williamson continues to make that happen. Will she get her own series? Probably not, but she’s better developed (in the good way) than many other females in comics today!

THE RETURN OF THE ORIGINAL ARTIST

Goran Sudzuka, who provided the art for the first arc, is back, and he’s providing just as much power to the characters and the action as he previously did.

The last panel was my favorite, and it shows that there’s a kind of conflict going on that even Anderson on the “other side” cannot help with very much. Still, it’s good that she’s there to help Jackson, the main character, out when she can. Since he’s dealing with otherworldly things and people, he can really use that!

By mixing the supernatural with the natural, this book keeps me turning the pages quickly by creating a powerful and engrossing story, not to mention fascinating and well-developed characters.

If you didn’t get the chance to pick up Ghosted’s previous stories, the previous two five-issue arcs have been collected into trades! This is the perfect time to do that since a new story will begin next time, and it will help enjoy it as much as possible! That way you pick up everything that’s going on in this wonderful book!