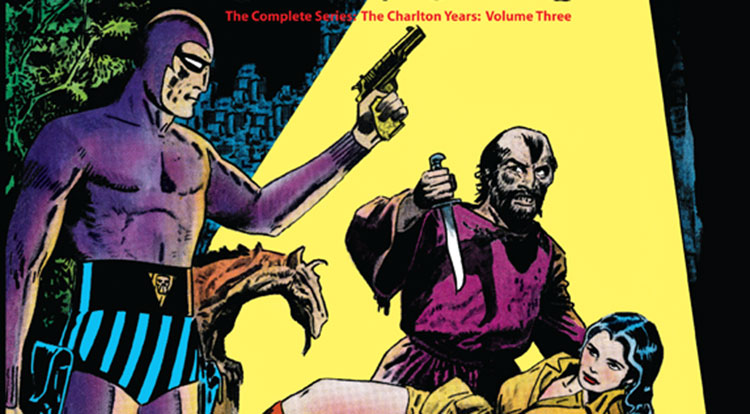 Available now online and at local comic shops, Hermes Press would like to announce that The Phantom Charlton Volume 3 and the Murphy Anderson Buck Rogers Sundays are now available! Murphy Anderson was one of the seminal comic book storytellers who defined the Silver Age. In addition to his work on the Buck Rogers daily strip, he wrote and drew the Sunday version of the feature from 1958 to 1959 creating three continuities: “Search for Impervium”; “Supemova Plot”; and “California Earthquake Plot.” These Sundays have never been reprinted anywhere and now, for the first time, are collected in their entirety together. The strip, which was created in tabloid form, will be reproduced in its full size, in full color, reconstructed to perfection. Visit http://tinyurl.com/buckrogersanderson to order now.

Anderson has long credited the strip as a major influence on his art and his runs on the feature have long been sought by collectors but never comprehensively collected together. This extra large volume collects Anderson’s complete work on the Sundays and is supplemented by essays, original artwork, and tons of extras that make this book the ultimate archival collection of Anderson’s work on science-fiction’s most important comic strip. The early 1970s comic book adventures of The Phantom return in full, glorious color! Hermes Press is collecting all 74 issues of The Phantom comic books which ran from 1962-1977, and this is the third volume of the Charlton years. The Charlton comic book version of the grand-daddy of costumed heroes, The Ghost Who Walks, is available again, digitally remastered to look better than the original books. Don’t miss it! Visit http://tinyurl.com/phantomcharlton3 to order now.