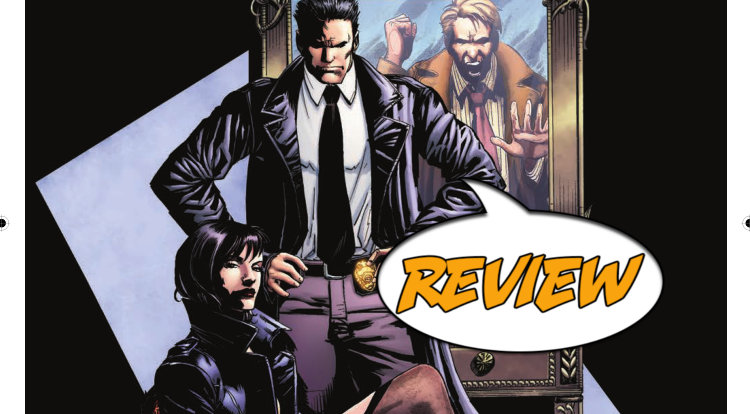 Joe and Kate must investigate one of their own accused of breaking the law of the dreamscape while Joe deals with personal demons by visiting a woman’s recurring dream.

WHAT TO EXPECT FROM JMS

Straczynski has created layer upon layer of mythology in Dream Police in a style that is reminiscent of his work on Midnight Nation; he has taken the archetype of the hero’s journey, built up a fictional world around it and presented it to readers as something both recognizable and ethereal. Even the protagonist of Dream Police #3, lieutenant detective Joe Thursday, is the leading man readers have come to expect in Straczynski’s creator owned work, that is to say, that Joe is troubled, emotionally unavailable in the beginning and physically imposing. Despite of these familiarities Dream Police #3 is a stellar comic book. Inception-style this issue takes readers deeper into the dream world and reveals some of the deepest and most sacred rules of the titular law enforcement organization … as well as dangling the potential consequences along with them.
Joe and his partner (female, as she stands now) detective Kate Black, are tapped to investigate a dream policeman who may possibly be crooked, which is to say, violently invading the active dream life of a yet living dreamer. In a classic police storyline Joe struggles with apparently rock-solid evidence and the raging voice of his own gut that belies that innocence of the accused.

Dream Police #3’s plot hinges on a mirror narrative between Joe and Kate’s investigation and Joe’s exploration of the recurring dream phenomenon. He himself struggles in his personal life (or as much as a dream policeman is capable of having), and his professional life. By the time this issue ends Joe has to make sense of both puzzles if he is to move forward to the next installment of Dream Police as a fully formed protagonist.

J. Michael Straczynski’s spectacular storytelling is solidly in place throughout Dream Police #3, every character speaks like a real person (who grew up in New York City), with the narrative that bears these two things well-crafted, the mystery enigmatic.

GREAT ART FOR A GREAT STORY

Sid Kotian draws Dream Police #3 with a comparable style to the aforementioned Midnight Nation (although it was Gary Frank tackling art on that graphic novel), everyone from Joe to Kate to the people smattered in the background are slickly designed with edgy line work and bright colours suggestive of the hyper-reality they inhabit. For example: Dream Police #3 opens with a purple wash and Joe explains that since it is fashion week in the waking world the colour of the season bleeds over into the dreamscape. He and Kate are almost meta-textually aware of the purple haze and share a brief conversation on the subject. The art and the writing work together in a special way during moments like this and speak to the power of comic books as a collaborative art form.

Kotian’s design of Joe Thursday renders him a typical Straczynski protagonist: well built, tall, dark hair and gives him the neo-noir style that heightens his journey through emotional damage over the course of Dream Police #3. Although, again, as with the writing, for all the familiarity that readers can pick up on this character is no less compelling to behold.

Everything about the issue is well crafted and, accordingly, it looks amazing.

Dream Police #3 is not a bad jumping on point with a recap page at the start of the issue, but as with most of J. Michael Straczynski’s creator owned work, it is more than worth your time to acquire the full run and immerse yourself in the world of Dream Police, Joe Thursday and psychological hypotheses.