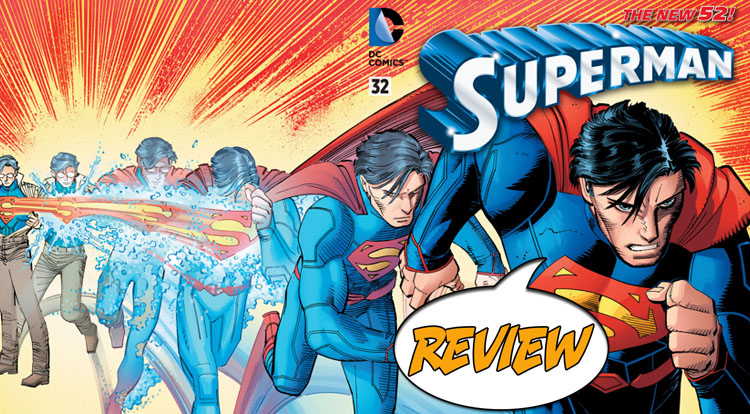 A much-vaunted new era for the Man Of Steel is in the offing, thanks to a couple of comics’ heavy hitters.  Are they up to the task of the first superhero?  Your Major Spoilers review of Superman #32 awaits!

SUPERMAN #32
Writer: Geoff Johns
Penciller: John Romita, Jr.
Inker: Klaus Janson
Colorist: Laura Martin
Letterer: Sal Cipriano
Editor: Eddie Berganza
Publisher: DC Comics
Cover Price: $2.99
Previously in Superman: After the deaths of his adoptive parents, young Clark Kent moved to Metropolis to be a reporter for the Daily Planet.  Using a ceremonial battle armor from his planet of origin, Clark became Superman, defender of the weak and blah blah blah fishcakes.  For a little more than five years, he has been operating as a hero, both on his own and as a member of the Justice League, and has struck out on his own as a reporter.  He has begun a relationship with Wonder Woman, but perhaps has neglected his life as Clark Kent for too long…

I ASSUME HE’S NOT SUPER

Geoff Johns has a few tricks that he pulls out of his metaphorical writing quiver over and over again, one of which is taking the general public’s assumptions about a character, inverting them, and then reinforcing the parts he wants to make cool again.  It’s a valid technique, and this issue kicks off with a classic example of it, as we open 25 years in the past, in a bunker in Omaha, Nebraska.  A young couple believe that the world it about to be destroyed by a dimensional incursion, and rocket their only child off into space to save his life.  Years later, we join Superman in battle with Titano the Super-Ape (who is apparently a cyborg now), while Jimmy Olsen works to get pictures of it all.  Cut to the Daily Planet, where we get more backstory on Jimmy than I recall him having since the ‘Lois And Clark’ days, while Perry White offers Clark his old job back, and recommends that he stop separating himself from his friends.  He reminds Clark that every one needs someone to talk to (“I’m not saying I’m that person for you,” says Perry, “because I am NOT.” Heh.) and sets CK off on a quiet journey of self-discovery…

Cue the fighty-fighty!  Superman engages an alien ship, is overpowered by the monster inside, and only doesn’t get beaten down by the appearance of another hero.  The man takes down the alien, and dubs himself Ulysses, implicitly revealing himself to be the lost baby from the first half of the book.

I expect that the widest complaints about this issue will be aimed at the art of John Romita, Jr, whose current stylized “blocky with speed-lines” Jack Kirby-influenced style doesn’t change much from recent years.  There are some very nice moments in here, notably the interactions of Perry and Jimmy at the Planet, but once the battle sequences start, its dynamic slabs of heroic matter smashing into one another, ending with a shot of Ulysses smiling (in a very creepy manner, to be honest) about having returned home.  I appreciate Romita’s work, especially in its references to other classic superhero and adventure artists like Kirby and later-period Byrne, so I’m fine with the art save for the occasional huge-eyes face close-up.  The seeds of story being sown here are interesting, and I want to know about Ulysses, but the effect is that our main character is the least interesting part of the whole issue.  The moment where Clark tries to contact his superhero friends, only to find them busy, leading to him eating dinner alone in his empty apartment is a very strong character moment, which could lead Superman to a more humane outlook and perhaps towards regaining some of the lost human aspects of his character that were lost in the 2011 revamp…

THE BOTTOM LINE: GOOD, NOT WORLD-SHATTERING

All in all, it’s a good book, though not a great one, and it doesn’t serve as quite the massive game-changing jumping-on point that some of the advertisements might have you feel.  Still, Superman #32 does a good job of telling us who our hero is, albeit with some familiar Johns narrative tools in play, and enjoyable art throughout, earning 3.5 out of 5 stars overall.  It is very much like what I thought a Geoff Johns/John Romita Jr. take on the Man Of Steel would be, in all the best ways (and luckily only a few of the least).