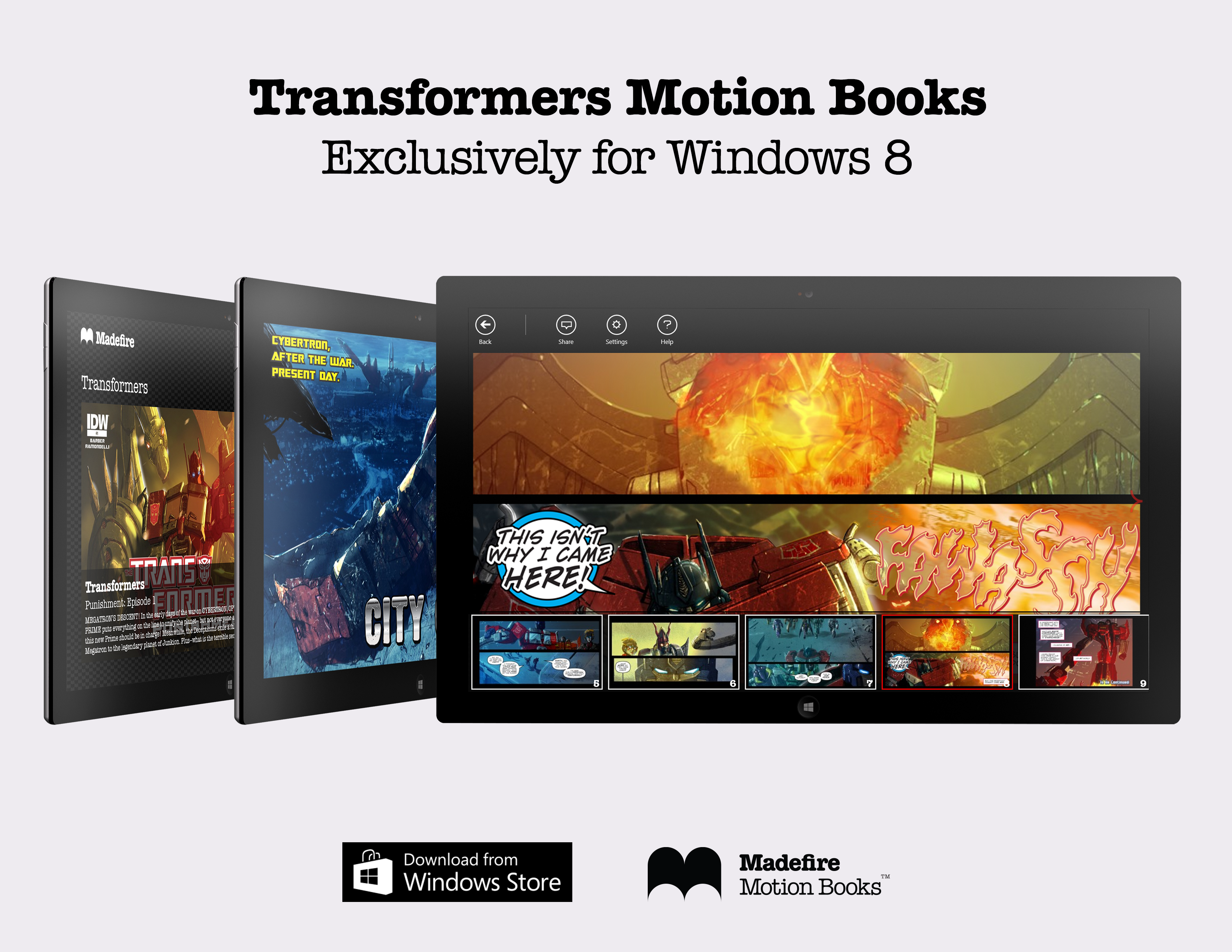 In collaboration with Hasbro and IDW Publishing, Madefire, today announced that the five-issue Transformers: Punishment will be the newest additions to expand the Madefire Motion Book library with an exclusive Microsoft Windows 8 platform release. These exclusive stories based on Hasbro’s iconic Transformers brand, will be available on all of the latest Windows 8 devices for no cost, and will provide a unique reading experience designed and built specifically for the digital screen.

Transformers: Punishment is all-new original content developed within the current IDW Transformers universe with its debut as a Madefire Motion Book. The creative team behind the five-part series are Transformers comic fan-favorites, writer John Barber and artist Livio Ramondelli. Autobots and Decepticons come alive and battle it out as Motion Books — the newest innovation in reading to come to Windows 8.

“It’s a thrill to see Optimus Prime spring into action,” said John Barber. “This is a hard-hitting action story, and Madefire’s Motion Books — including music and sound effects — deliver a powerful reading experience that makes you feel like you’re in the center of it all!”

“Windows devices are supported by a rich app ecosystem that offers a variety of quality apps that take advantage of the platform’s unique features such as Live Tiles, snap and Bing Smart Search integration,” said Todd Brix, general manager, Windows Apps and Store, Microsoft Corp. “The Madefire Motion Books app’s unique use of these features, paired with exclusive Transformers content for Windows users, really bring the app to life on the platform.”

Designed for reading on a screen, Madefire has built an end-to-end publishing platform called Motion Books — a benchmark reading experience for mobile, tablet and web that immerses the reader in a sequential narrative with sound, motion, and depth. Today, Madefire Motion Books expands beyond the iOS and web-reading partner, social network and creative giant deviantART, and is available on any Windows 8 device operating system. Currently, Madefire Motion Books is a free Windows 8 and iOS app that delivers the most innovative reading experience for digital devices as it pioneers the next chapter in storytelling. It has been an iOS 5-star rated app since launch, and was awarded an App Store’s “Best of 2012”.

“A global entertainment, like Transformers comics coming alive through Motion Books exclusively written for the Windows 8 platform is one thing, but teaming up with the biggest OS in the world makes it a huge milestone,” stated Madefire CEO and Co-Founder Ben Wolstenholme, “Its about bringing stories to life on the devices we use everyday – period.”

About Hasbro
Hasbro, Inc. (NASDAQ: HAS) is a branded play company dedicated to fulfilling the fundamental need for play for children and families through the creative expression of the Company’s world class brand portfolio, including TRANSFORMERS, MONOPOLY, PLAY-DOH, MY LITTLE PONY, MAGIC: THE GATHERING, NERF and LITTLEST PET SHOP. From toys and games, to television programming, motion pictures, digital gaming and a comprehensive licensing program, Hasbro strives to delight its global customers with innovative play and entertainment experiences, in a variety of forms and formats, anytime and anywhere. The Company’s Hasbro Studios develops and produces television programming for more than 180 territories around the world, and for the U.S. on Hub Network, part of a multi-platform joint venture between Hasbro and Discovery Communications (NASDAQ: DISCA, DISCB, DISCK). Through the company’s deep commitment to corporate social responsibility, including philanthropy, Hasbro is helping to build a safe and sustainable world for future generations and to positively impact the lives of millions of children and families every year. It has been recognized for its efforts by being named one of the “World’s Most Ethical Companies” and is ranked as one of Corporate Responsibility Magazine’s “100 Best Corporate Citizens.” Learn more at www.hasbro.com.

About Madefire
Founded in 2011 by Ben Wolstenholme, Liam Sharp and Eugene Walden, Madefire is a media and technology company. Madefire has built the Motion Books publishing platform that provides artists, writers and publishers tools for creating a new reading format called Motion Books. Madefire is backed by Toni Schneider at True Ventures, The former CEO of Automattic, makers of WordPress, as well as Bill Woodward (Anthem Ventures, former Chairman of Macromedia). The Advisory Board also includes industry leaders Mike McCue, CEO and Founder of Flipboard, angel investor Sina Tamaddon, former Senior Vice President of Applications for Apple Inc, Dave Gibbons, co-creator of Watchmen, the bestselling graphic novel of all time, and Bill Sienkiewicz, widely recognized as one of the greatest innovators of sequential art. For more information go to madefire.com.