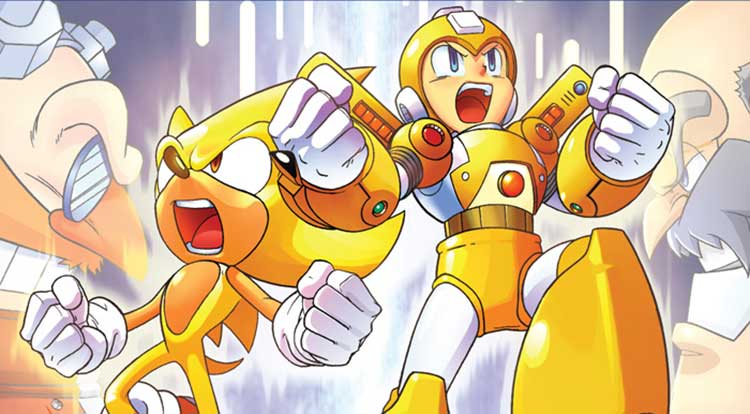 SONIC / MEGA MAN:
WORLDS COLLIDE VOL. 3
Script: Ian Flynn
Art: Ben Bates, Gary Martin, Steve Downer, Matt Herms, and Jack Morelli
Cover: Patrick “SPAZ” Spaziante and Ben Hunzeker
978-1-936975-97-6
$11.99/$13.99 CAN
6 5/8 x 10 3/16”
Trade Paperback
104 pp, Full Color
The BIGGEST video game crossover event of all time ends here with the stunning conclusion to SONIC/MEGA MAN: Worlds Collide! Dr. Eggman and Dr. Wily are locked inside their flying fortress–the Wily Egg! Inside are all manner of powerful defenses, including Metal Sonic and Bass! Outside is an army–almost every Robot Master ever made! Dr. Light’s life is on the line, and two worlds teeter on the edge of destruction! Enter Sonic, Mega Man and an army of their own! Sonic’s friends join Proto Man, Rush and Duo in an epic all-out battle to break through to the evil doctors, rewrite two realities, and save their home worlds! Don’t miss the third and final act of this epic 12-part Sonic the Hedgehog / Mega Man crossover event–“CHAOS CLASH!” WHEN WORLDS COLLIDE VOLUME THREE collects: Mega Man #27, Sonic the Hedgehog #250-251, and Sonic Universe #54 plus exclusive bonus features you won’t find anywhere else!\