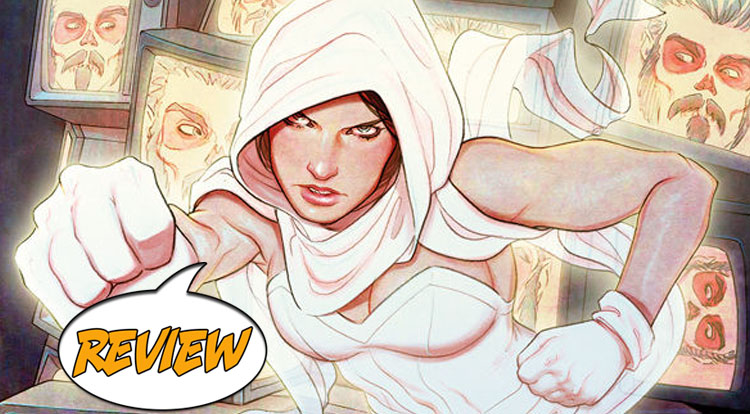 An all-new creative team and an all-new threat face Elisa Cameron, as the adventures of Ghost continue.  But is there really a demon on the airwaves in the Windy City?  Your Major Spoilers review of Ghost #5 awaits!

We pick up where we left Ghost last ish, having taken her battle against evil to the much more mundane criminals and jerkfaces haunting the streets of Chicago.  The issue opens with Ghost in action, easily downing half a dozen jerks with guns, leaving them for the police to find (thanks to the help of her friend Vaughan.  Thing is, she’s not entirely satisfied with this new turn of events, as the defeat of Doctor October and her arcane goons ended the immediate threat, but things are still falling apart, and the mystical rain has not let up.  It’s enough to drive a ghost around the bend, especially as we find that her roommates, Tommy and Sloane, are a bit loonier than I remember from the first four issues.  Tommy, for instance, is certain that a local horror TV host is actually a demon using his magics to fake terrible dismemberments and carnage in the guise of goofy interstitial segments for his Creature Feature movie show.  Even though Elisa doesn’t entirely believe his theory, she agrees to Ghost out and investigate, which is where things get weird…

Von Ghastly, the seeming bad guy, bears a striking resemblance to long-time Chicago horror host Svengoolie, with the added caveat that his effects (disembowelings, decapitations and more) aren’t really possible on the shoestring budget the show is known for.  Even more disturbing, when Elisa enters his stronghold, she finds herself unable to ghost through the walls and when goons attack, she finds herself able to be cut by their blades.  In a possibly-unrelated subplot, an unknown masked man has captured a bit of her essence, and is watching her on close-circuit TV as she realizes that things are not what they seem.  Art-wise, Duursema does interesting work, and while his art is better suited for the underground caverns and catacombs, I find his rendition of Ghost less satisfying than the last art team, and the action sequences are much different from the previous team.  There’s nothing particularly wrong with the art (and, indeed, the last-page reveal of Von Ghastly is very striking) it’s a little hard to warm up to the entirely new creative team.  I’m thinking that as I get used to the team in future issues, I’ll find myself warming to it…

THE BOTTOM LINE: NOT QUITE THE SAME

It’s not a disappointing issue, and in fact adds some interesting wrinkles to Ghost’s life and surroundings (a new job as a reporter, for one, with a new identity, sort of) and the idea of a TV groovy ghoulie getting real mystical powers has legs, it’s just the transitions that are daunting.  In short, Ghost #5 is still an above-average issue with some cool moments and interesting art, even if it’s not Kelly Sue and company, and certainly doesn’t mean the end of my interest in Ghost, earning 3 out of 5 stars overall.  I’m willing to at least ride out this arc, as it has some clever ideas floating around that could turn into something irresistable…