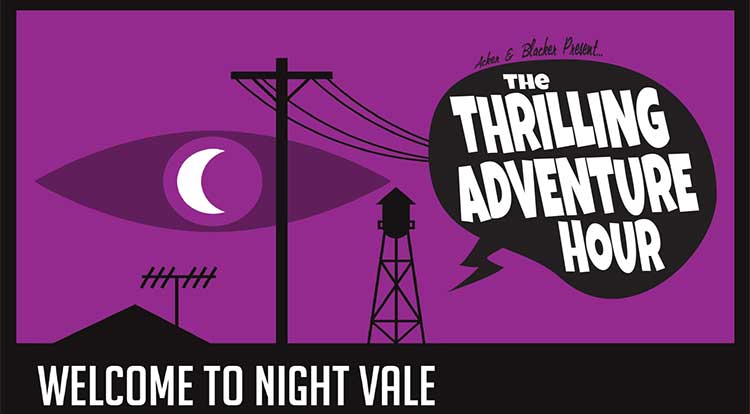 SDCC’14: The Thrilling Adventure Hour and Welcome to Night Vale team for another Comic-Con weekend event

After wild success in Seattle, The Thrilling Adventure Hour & Welcome to Night Vale team up again to bring you an evening of live entertainment during San Diego Comic-Con 2014, on Saturday July 26th at the Spreckels Theater.

They’ve even added an Exclusive After Party (21+) for VIP ticket holders – a chance to mingle and cocktail with the cast, crew and guests in the historic Speckels Grand Lobby. There are also special gifts included with many of the tickets.

City Arts in Seattle says of the cross-over event, “For fans of narrative podcasting, …this is the equivalent of the Beatles and the Rolling Stones doing a one-off split bill, but much quieter.”

Don’t miss your chance to see the groups live on stage at The Spreckels Theatre in San Diego’s Downtown Theatre District: Saturday, July 26 at 8PM. Exclusive cross-over merchandise will be available for purchase at the venue. The show is all ages (although the VIP After Party is 21+), open to the public and does not require a San Diego Comic-Con badge. However, tickets will go fast so reserve yours now: http://bit.ly/1qrbo4w

And watch www.thrillingadventurehour.com for more details in weeks to come.

About The Thrilling Adventure Hour

The Thrilling Adventure Hour is a staged show and podcast on the Nerdist network in the style of old-time radio in which actors you know and love from television, comedy, animation, and film dress nicely and enact all manner of genre-based comedy segments.

About Welcome to Night Vale

Welcome to Night Vale is a podcast in the style of community updates for the small desert town of Night Vale, featuring local weather, news, announcements from the Sheriff’s Secret Police, mysterious lights in the night sky, dark hooded figures with unknowable powers, and cultural events. Turn on your radio and hide.

The show is created by Joseph Fink and Jeffrey Cranor and features the vocal talents of Cecil Baldwin. Welcome to Night Vale are in the middle of a nationwide tour bringing the live performances of their podcast to the masses. They have also just announced a novel to be published by Harper Perennial slated for a 2015 release.

Based in Seattle, Ladykiller is a transmedia marketing firm faithfully serving the pop culture and gaming industries providing marketing strategy and event services. From consulting and strategic design to turn-key execution, Ladykiller provides completely seamless, multi-faceted, integrated marketing solutions that work together – the kind of marketing that delivers results.