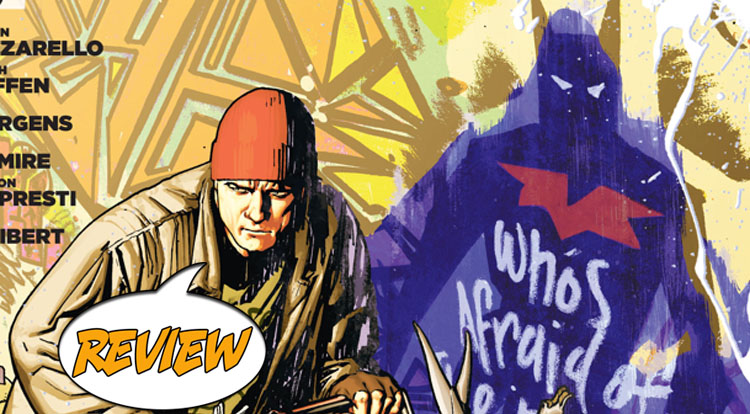 My semi-sorta-weeklyish check-ins with the oppressive dystopian future of the New 52 is back on this week, and all the readers are wondering: Can Terry McGinnis keep these terrible events from occurring, or are our heroes doomed?  Your Major Spoilers review of The New 52: Futures End #7 awaits!

THE NEW 52: FUTURES END #7
Writer: Brian Azzarello/Jeff Lemire/Dan Jurgens/Keith Giffen
Penciller: Aaron Lopresti
Inker: Art Thibert
Colorist: Hi-Fi
Letterer: Dave Sharpe
Editor: Joey Cavalieri
Publisher: DC Comics
Cover Price: $2.99
Previously in The New 52 – Futures End:  The DC Universe of 30-years-from-now is (was?  Will have been?) a charnel house, with the remaining superhumans converted into brutal OMAC monsters that hunt down the rest of the population.  In a desperate bid to save the future, Batman created a time-portal, only to die before he could use it.  His protegé, Terry McGinnis (aka Batman Beyond) was able to take the leap backwards, but due to calibration issues, landed somewhat short of his goal: Five years into the future of the DC Universe.  The heroes of this world are familiar (ish) but their status quo definitely is not, and the road to the hellish future is already paved with some sort of intentions…

FRANKENSTEIN VS. BLACK ADAM IN THE PHANTOM ZONE

This issue opens with a sequence that shows both the series’ greatest strength and its greatest weakness in the space of a few pages:  Frankenstein, former agent of S.H.A.D.E. and Amethyst, former princess of the Gemworld are in deep space, battling Black Adam, the former king of Khandaq, who was apparently sent into the Phantom Zone by Superman, while Ray Palmer, the once and future Atom works to close the portal to keep Adam in.  None of this was really set up in the previous issue, and the strength of it comes in the fact that it’s a cool notion that makes a good scene.  Frank makes a good showing against the magical bad guy, and if you’re into zero-G punch-em-outs, it’s nice.  The weakness comes in that this sequence serves only to show us the current status of another future version of someone we know, and leads to the revelation Hawkman and Stormwatch were killed during the attack in an earlier issue, their lifeless corpses taking up a third of a page of carnage.  Back on Earth, Lois Lane continues to investigate the mystery of Red Robin with a talky and overly dramatic “interview”.  Grifter’s spinal damage and paralysis are already repaired, leaving him up and about on Cadmus Island, while Jason Rusch is revealed to be working with a mad scientist on an attempt to create super-technology to balance out the common man with the superhumans, and Batman Beyond makes first contact with Mister Terrific, leaving the O.M.A.C.-modified corpse of Katana behind.  The fact that said robo-body intrigues Mister T bodes ill for the future… of the future…

This issue solidifies the fact that about a week takes place between each issue, which hasn’t been 100% clear to me until now, and while there are bits of dialogue and moments of character that are enjoyable, the general effect of this issue is numbness.  Jason’s bit of story accomplishes very little (but, admittedly, shows us a possible reason why Ronnie Raymond has been acting like such a tool) and I’m still unclear as to what is going on with the ultimate slash-fiction super-couple Franke-Thyst.  We’ve seen that the heroes are torn to bits and their remaining disgusting gobbets of flesh used to make O.M.A.C.’s more terrifying 25 years down the line, so the Mister Terrific moment could be important, but there’s not a lot of dramatic heft to it.  Until right now, I hadn’t even realized that Katana’s body was in the “past” with Terry McGinnis, so it’s use as a seeming Maguffin kind of comes out of left field.  This issue moves pieces on the metaphorical chessboard, but the endgame is nowhere in sight and the characters seem to be in neutral as we build up for the next phase.  The 52 weekly series had a lot of the same flaws, but had four major stories to tell, and made the central figures of those stories interesting and their motivations clear.  Even Steel’s story, which ended considerably earlier than those of Elongated Man, Renee Montoya or Booster Gold, had motivation, a beginning and an end.  This book makes the same mistake as Countdown to Final Crisis, taking a wide-angle view of too many characters, with at least a dozen unsolved mysteries in play, making me worry about what happens at DC once the series is over…

“(Strong Hero) has been forced to team up with (Noble Hero) while (Gadgeteer) tries to undo the madness all around them.  (Secret identity) has suffered a terrible loss and might lose hope, but will the presence of (Lost Hero) change her mind?”  At this point, a new reader to this book would have to purchase all seven issues in order to parse the story, a phenomenon that will only get worse as the book goes on.  Artistically, there’s nothing particularly off about the issue, although pages inked by Art Thibert seem very noticeable, and the unnamed little girl who has been hanging around Grifter’s chunk of the story gets a name:  Fifty-Sue.

I had to take a moment there, as I legitimately cannot decide whether that name is brilliant and meta or dunder-headedness incarnate.  All in all, this issue feels like a lazy river ride: There is forward motion to be had, but it’s at a weirdly leisurely pace, we’re kind of bouncing off the sides, and I have a suspicion that we’ll come right back around to where we started once the whole thing is over.  The New 52: Futures End #7 takes too many pages from the playbook of ‘Countdown’, and ends up being a dull reading experience, earning 2 out of 5 stars overall.  The title implies that we’re looking at a sequel/revival of ’52’, but it lacks the inventiveness of that book, instead emptily echoing it’s surface elements in a disappointing fugue.