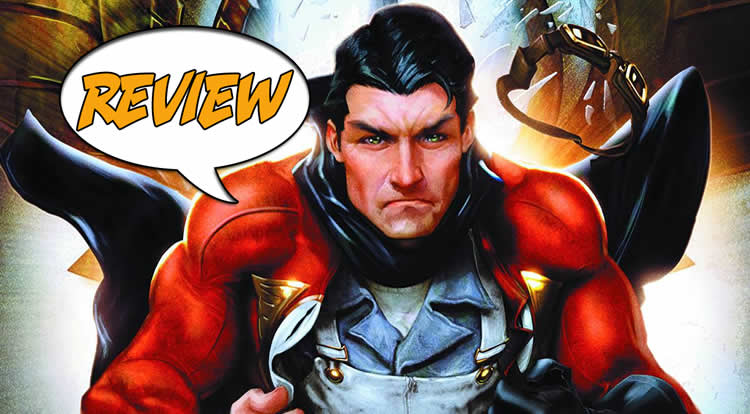 It continues to fascinate me how the “pulp heroes” of the 1930s and 1940s are making a huge comeback. Just check out the recent revamps coming out from Dark Horse and Dynamite Entertainment.

One of my very favorites comes from Dark Horse and is called Captain Midnight. The final issue of the first year in the series is now available in local comics shops.

Previously in CAPTAIN MIDNIGHT: “The start of a brand-new arc! Reeling from the death of one friend and the betrayal of another, Captain Midnight throws himself into his work to mourn. Disillusioned with why he wears a costume, the time-traveling hero ponderswhat the world needs more of: the brawn of Captain Midnight or the brains of his civilian identity, genius inventor Jim Albright?”

If you’ve been reading Masks and Mobsters from Monkeybraincomics.com or Ghosted and Nailbiter from Image Comics, you’re already familiar with the excellent scripting of writer Joshua Williamson. (He also co-wrote several stories in a recent issue of Detective Comics for DC.) However, don’t expect Captain Midnight to in any way resemble those books (except that it’s very well written).

What makes Williamson such a terrific scripter is that he can adeptly handle many different kinds of storytelling, and this book is no exception!

I’m particularly intrigued by how this hero, Jim Albright, is what I refer to as “Captain America done right.”(And yes, that’s still true even after the recent Cap movie.) In the purest terms, Midnight is a soldier. He respects the chain of command much more than CA ever did, and he’s an amazing fighter that in my opinion outlcasses Steve Rogers by a far piece. (I guess I’ve become really discouraged with how Marvel is handling Cap these days. Sigh.)

But even a soldier can have misgivings, and that’s where Albright is at this point. He’s been fighting the good fight, but losing people dear to him. Not only that, he’s aware of the numbers of people who died during World War II, and he understands that he’ll be the last one to remember that war since he’s much younger than the other veterans.

Manuel Garcia’s art is very strong, and it does match the different aspects of the story. When Jim’s talking with a waitress at a local diner, the facial expressions are spot on. Also, Garcia’s take on dream sequences and happenings in the past also are consistent with our expectations and propel things along nicely.

It’s also important to point out that the color work from Marta Martinez is particularly striking, helping us realize just what’s happening. When Jim’s remembering what happened in WWII, the coloring fits the mood very well. And when Jim’s attending a friend’s funeral, the choice of darker tones really helps us know what our hero is feeling. Nicely done!

Cool cover too, by the way!

BOTTOM LINE: So Get on Board with Captain Midnight Already!

This issue is listed as a “jumping-on” point for new readers. If you missed the previous issues, you once again have the chance to get into this excellent book. If I were you, I’d be sure to get into Captain Midnight because it’s a great comic on all levels!

If you didn’t know this, our hero was a huge deal back in the day, with all kinds of merchandise sold because it featured him. There were radio adventures and comics as well. That hasn’t happened with Midnight yet today, but I’m hoping there will be a real revival of this character and his adventures.

Television or movies, anyone?

Needless to say, Captain Midnight is classic because he works and works well. Want to know how? Be sure to pick up this issue and you’ll begin to understand!