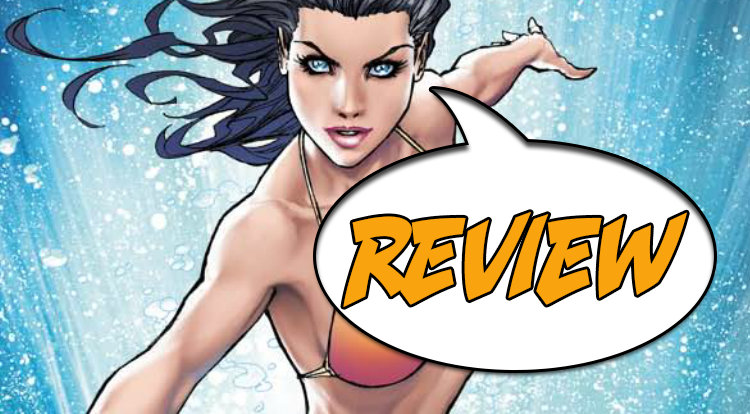 Michael Turner’s underwater world and heroine Aspen Matthews are celebrated in a collection of short stories from their first annual issue. The first story in Fathom Annual #1 recounts a story involving Chance Calloway. Long term Fathom readers will recognize him as Aspen’s ex. Calloway is dragged all the way to Santa Monica in order to be interrogated about his knowledge of the Blue and, in particular, their advanced technology. Naturally, writer David Wohl has Calloway deny any and all knowledge on the subject until such a time as he can be returned home. The final pages of the story reveal the giant not-of-this-world ship Calloway just so happens to have and focuses largely on this character’s defiance for order and authority even given his military background. The story is fun, if a bit contrived to show just how cool and antiauthoritarian Chance Calloway is.

Fathom Annual #1 then gives way to a tale about friendship penned by Nei Ruffino (who also takes on art duty, but more on that later), in probably the messiest story on the page. Aspen Matthew’s dear gal pal Judith has been having a rough go in her dating life. As she regales Aspen with her misadventures from the night before Ruffino employs unnecessarily flowery imagery to imply that Judith experiences a sense of loneliness comparable to what Aspen must experience every day as a woman out of water. In the end Aspen employs her water wielding abilities to dry Judith’s tears and a Chinese fortune-cookie-esque moral closes the story.

Third up in Fathom Annual #1 is an exercise in morality by Vince Hernandez. Aspen joins a group of marine biologists who have limited empirical evidence on a new underwater creature. Her unique skill set allows Aspen to get closer to the eel-like entity than anyone has been able to and Hernandez gives her a nice moment of self-exploration where she must decide whether to reveal information about the creature to the humans she lives amongst or let it continue about its life in peace. In a move that is nice, if not remotely surprising, Aspen sides with the pseudo-eel and reluctantly returns to her team empty-handed, but with the sense of having done a job well.

Scott Lobdell closes out Fathom Annual #1 by bringing to life a story conceived by Michael Turner and Bill O’Neill. This is a sort-of origin story of Aspen and presents the story of her first time working in a deep sea research facility. Aspen’s intuition proves invaluable to those around her until disaster strikes! Good thing for dormant, but inherent, abilities. Aspen’s true nature as a Blue is revealed even as another key character’s proclivities for an aquatic lifestyle is revealed. This is the longest and most well-told story in all of Fathom Annual #1 wherein Lobdell really manages to elevate the idea of an alien society dwelling beneath the surface of earth’s oceans.

Though the scribes of Fathom Annual #1 are all of different skill levels they have all succeeded at presenting short stories that are solidly based in the world of Fathom and revel in the types of stories that can be told therein.

Like the writers of Fathom Annual #1 the artists are kind of a mixed bag. Dannis Calero is first on the docket and his art serves the tale of manly-man cool guy Calloway very well. He does square jaws and shadows with aplomb. Writer-artist Nei Ruffino’s art offerings are as rough on the second story as his pencils are. The women are inconsistently portrayed (leaving their absurd proportions aside for a moment), and, at points, don’t even look quite human.

The second half of Fathom Annual #1 fairs better overall. Jordan Gunderson has a solid hand on how objects move in an underwater environment for Aspen’s search. The line work is appropriately flow-y and beautiful and the marine creature Aspen has set out to find looks both cool and menacing at the same time. The final story in Fathom Annual #1 is drawn by Michael Turner. It’s rendered with not only skill, but affection for the character and the story being told. Aspen is at her best here and Turner aptly handles the transitions from land to water and the special changes that are inherent to both worlds.

Overall, the art of Fathom Annual #1 is very well handled and each artist tasked to the story that suits their style the best.

Fathom Annual #1 does an excellent job at being an annual. It’s fun. It’s crafted by people who enjoyed working in this medium and this world. The stories are interesting and sweetly short. If you dig Fathom and you dig Aspen Matthews this issue is worth taking a look at – although the $5.99 price point might keep some readers back.