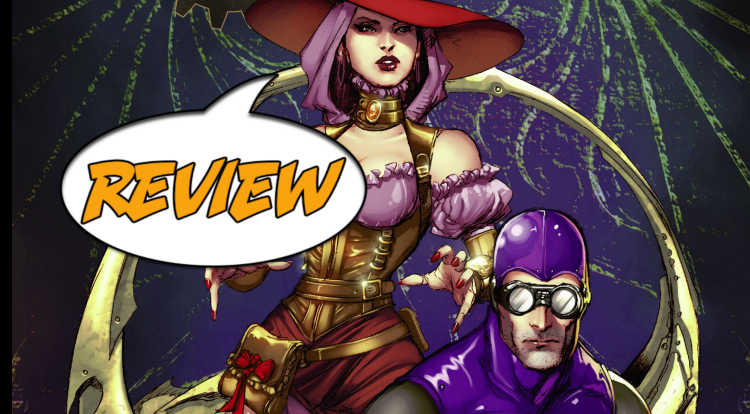 Magna makes it to a mysterious island where she encounters the Phantom and they team up for the remainder of this issue. If you are not incredibly familiar with the characters in Dynamite Entertainment’s current library and the events of the Legenderry series to date then you will be lost, lost, lost from the very first panel. Bill Willingham has proved in the past with his work on original series Fables that he can handle a large cast and vast world, but in Legenderry #4 this story is already falling apart.

Magna seemed to have been lost for good, but we discover her at the beginning of Legenderry #4 washed up on the beach of a tropical island face to face with a mechanical dog about the size and scale of a direwolf. The dog’s named is Devil (an uninspired choice), although he’s really more of a C3P0 analogue and jabbers on and on about his etiquette module in one of Legenderry #4’s only charming bits of writing. Devil is, of course, an agent of the Phantom and quickly bring Magna to his leader.

Thus begins the cycle of Magna encountering bad news dudes and being every bit the damsel in distress as a foil to her more popular sister. It’s boring on the page and it’s boring when the reader stops and thinks about it. Given the pedigree Willingham comes with Magna should have carried a bit more spunk to the page.

The villainous scheme unfolds just a tad more as Legenderry #4 continues along populated by many characters who, even when given name plates by way of introduction, it’s difficult to deduce where they come from inside the Dynamite universe. However, so little is revealed about them that the scene hardly bears mentioning.

It felt as if Willingham were building toward some sort of reveal, but unfortunately it never pans out. Magna kills a mutant beast before Legenderry #4 can be closed, some generic steampunk words are tossed about and the reader is left wondering how long Bill Willingham’s name can keep people coming to this series since the story playing out panel to panel is lacking.

NOT GOOD NOT BAD

Steampunk has very particular artistic connotations. With most of Legenderry #4 taking place on abstract-tropical-island there is very little room for that aesthetic to thrive. Sergio Fernandez Davila draws generically nice characters, Magna is rendered a bit too pin-up-y for my taste, but there is nothing too special about the art as it makes it onto the page.

Colourist Wes Hartman is much the same. The colours are fine. They neither heighten nor detract from the final product and, again, when Legenderry #4 is supposedly focused on being a steampunk adventure I am forced to find this lack of finesse detracting.

Unless you love Dynamite and its characters than Legenderry #4 is probably not for you. There is not enough information or story to grasp onto as an outsider. If this is a cast of characters you dearly love than that is reason enough to bother.