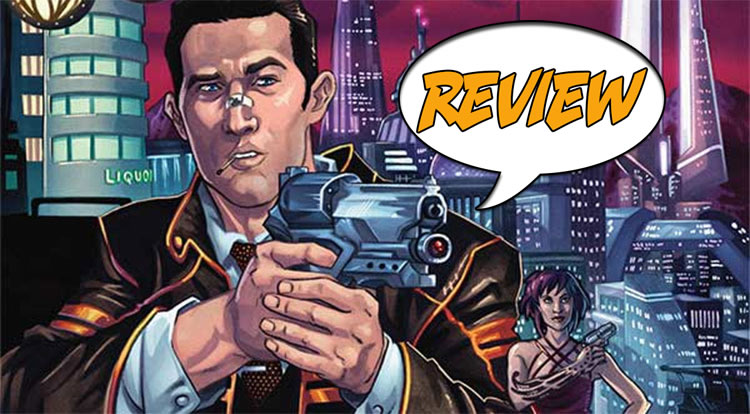 I’ve long been a fan of crime stories as well as science fiction. So I was very happy to find out that this comic actually brings both genres together.

What’s also very cool is Daniel Corey, who brought the excellent Moriarty comic series to life not very long ago, is scripting this fascinating book as well!

Previously in RED CITY: “In the wake of a systemwide civil war, hard-nosed interplanetary investigator Cal Talmage is given a simple mission to find a missing ambassador’s daughter in Mars Central, a.k.a. Red City. The routine case quickly complicates as Cal finds himself in the midst of rival alien mobs, street vendettas, and political conspiracies. He struggles with personal demons as he discovers that another war is brewing, and the lives of an entire race hang in the balance.”

Just because technology improves, that doesn’t mean crime will stop. Yes, I’ve seen films that postulate technology will prevent crimes from happening, but I don’t buy it! Criminals will likely be ahead of the curve, not behind it.

Also, the scope of crimes will likely increase. As people can move around more easily and quickly, we may not be able to contain people who want to kill more individuals or groups, then escape into another part of the galaxy.

Red City looks at this kind of thing. What appears to be something uninteresting blossoms into a “major crime,” and the characters needs to incorporate both sci-fi and police work to get a handle on what’s happening.

When it comes to both genres, it’s critical to care about the individuals involved. If not, it’s just a mental exercise.

Corey does a great job of bringing these folks to life, particularly the main one, Cal Talmage. He struggles with space travel as well as dealing with “people’ of all types and temperaments. He’s constantly being told, “You insult me!” by the characters he meets.

In other words, he’s the kind of detective I like to read about.

Some of the aliens look like steps up Earth’s evolutionary ladder, while others look like something completely different. But they all have their own agendas, and that makes the reading interesting and fun. Corey keeps the pacing moving quickly, stopping only occasionally to give us information we definitely need to know.

From humans to whatever, the characters are easy to understand and distinguish from each other. When it comes to sci fi, that’s particularly important because we need to know who is who, particularly when they belong to the same species.

Not only that, humans need to easily told from each other so that we don’t have to wonder who’s doing what. A dark-haired white guy needs to have distinguishing features from other men or we’re good and lost.

The art in this comic accomplished both of those important goals. Add to that the artist’s ability handle both dialogue and action very well, and I’m anxious for next month’s issue to hit the stands! When it comes to mysteries, I just have to know what’s up!

BOTTOM LINE: A “CRIME NOIR”/SCI-FI MYSTERY OFF TO A GOOD START

As I often like to point out, I enjoy something different in my reading diet. Murder mysteries are great as well as science fiction stories, but when you mix the two together as effectively as Red City does, you have to pay attention. What technology may prove the be significant? Also, which characters are necessary for us to follow to figure out whodunt?

It’s those kinds of things that will keep me visiting Red City for months to come! I hope you will be, too!