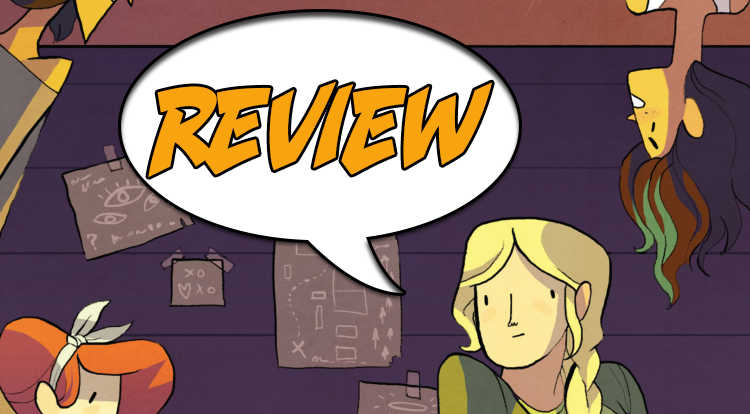 The Lumberjane scouts have tumbled into a booby-trapped underground cave. Let’s spend an issue watching them escape! AN ADVENTURE IN ESCAPE

Lumberjanes #3 opens with Jo, Ripley, April, Mal and Molly (our titular Lumberjane scouts), in a cave beneath the earth. It’s probably the scariest place any of them have ever been. What else is there to do? The girl head deeper into the cave! Via tunnels! Following gems! The subterranean system is full of scary pseudo-mystical statues that seem to tie in to the prophecy of the holy kitten that has been built up in previous issues.

Before too long the girls encounter a Talking Statue. The Talking Statue challenges five pre-pubescent girls to FEATS OF STRENGTH! Noelle Stevenson and Grace Ellis make a smart choice in having April (the most delicate and feminine of the Lumberjanes), not only be the one who takes on the Talking Statue – but she rips his arm off! It’s awesome! The defiance of readers’ expectations is one of the reasons why Lumberjanes #3 and Lumberjanes as a series has become so wildly popular … and it doesn’t end here.

Moving along through the pages of Lumberjanes #3 Molly winds up tripping one of several booby traps until they are confronted by an anthropomorphized owl golem who wields an axe. Yeah. How do five little girls overcome to force of an anthropomorphize owl golem who wields an axe? Mal and Ripley do a fastball special. Yes. Exactly like Colossus and Wolverine do across the X-Men titles. They address the move by name (repeatedly), and it manages to come across as both adorable and awesome!

Stevenson and Ellis touch on the summer camp romance that appears to be brewing between Mal and Molly (more adorableness), and it really feels like they are playing the long game with these two. If they wind up together, beyond the CPR-smooching of a past issue, as much as young girls can be I hope the writers do hold out – the payoff would feel sweeter.

Up to this point in Lumberjanes #3 we’ve seen April’s prowess, Mal and Ripley’s prowess and Molly’s prowess at stumbling into trouble. The final obstacle the scouts must overcome is a series of codes and puzzles. Who could possibly come to the rescue? Jo! Yeah! Jo is rather the Sherlock Holmes of the group with knowledge of: the Fibonacci sequence. Molly, to her credit, figures out the anagram at very end in a clever play again by Stevenson and Ellis to pair both feats of strength and intelligence. They’ve written five parts of a functional human being into the Lumberjane troupe and that is a really special thing to see play out on the page.

Lumberjanes #3 ties up with April, Mal, Molly, Jo and Ripley returning to camp to be remanded by their counselor and the camp director and destined to muck out the moose stables. The writing team has penned one of the more fun comics out on the racks right now and all the craziness fits together seamlessly in this issue.

Lumberjanes #3 looks like a cartoon! While Brooke Allen’s style may not be every reader’s favourite thing (the influence of Adventure Time is, at times, a bit overt), it feeds into the story presented and, ultimately, just heightens everything about the strangely deadly world of the Lumberjanes and this campground. Ripley, in particular, has arms that defy physics and gravity whether it be running along the ground like a quadruped or hugging April for fear of her life. Given the fantastical rules of the Lumberjanes series Allen’s loosey goosey style fits right at home.

She deserves singular praise for having representations of various body types and ethnicities across the Lumberjanes; while at the same time Jo, Molly, Ripley, Mal and April all recall girls readers have encountered throughout their lives.

All ages comics get a bad knock. Lumberjanes #3 can be read and enjoyed by you and any tiny children in your life and should be. The series isn’t too far gone yet and you would be doing yourself a disservice if you elected to pass it by.