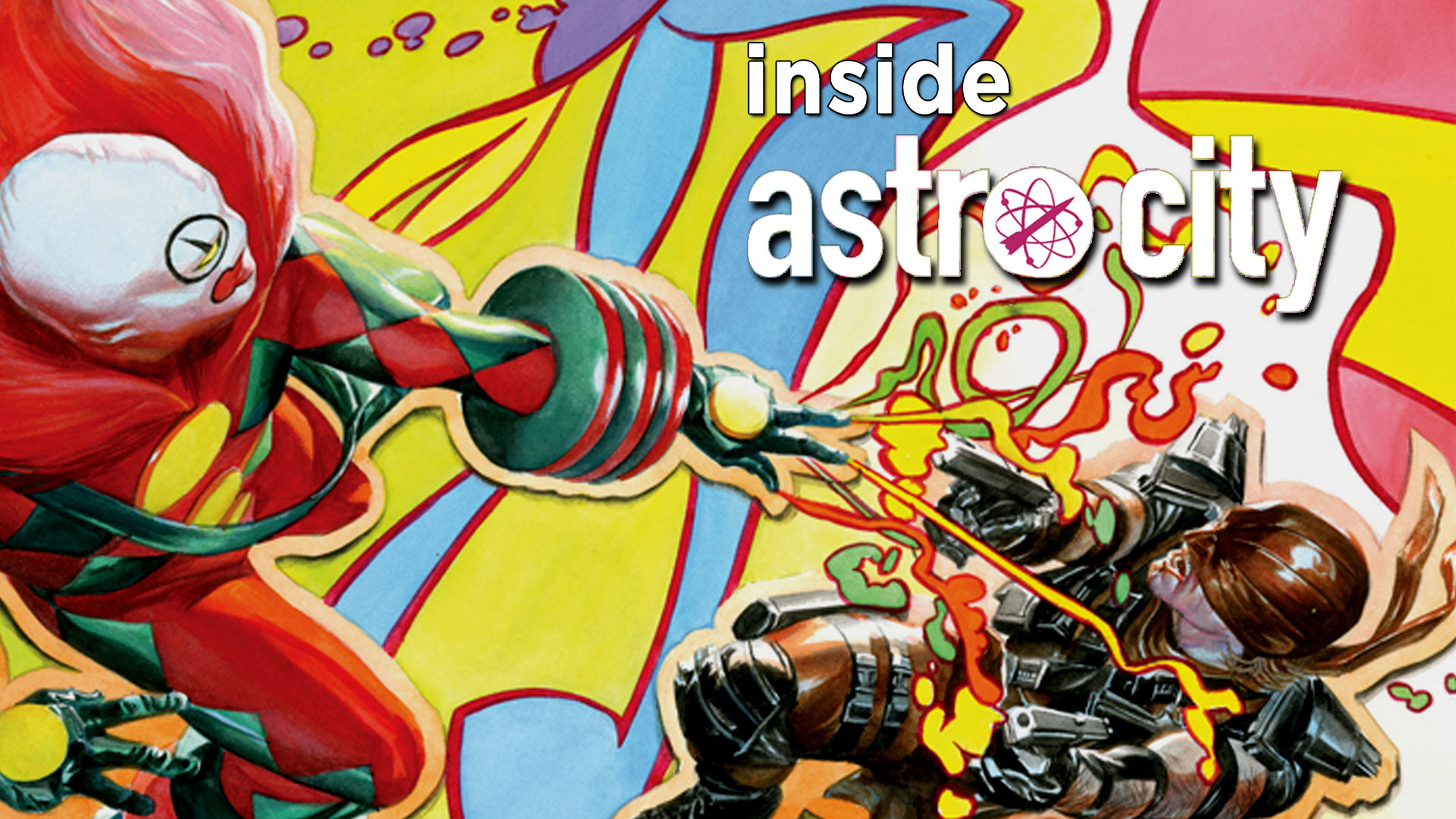 Inside Astro City #13 with Kurt Busiek

Welcome to Inside Astro City, a new column focusing on the Vertigo Comics series Astro City from Kurt Busiek, Brent Anderson, and Alex Ross. Each month, we’ll take a look at the current issue of the series, and ask series writer Kurt Busiek questions about the book. Let’s jump into issue 13!

Astro City #13: 24 hours. 24 pages. A robot. A bank robber named Gundog. The Hanged Man. Jack-In-The-Box. The eternal, mysterious Dancing Master. And a whole lot of romance. One of ASTRO CITY’s most unusual stories, of city wide turmoil and changing lives, all in a single day. 1. Issue #13 covers every hour of a single day, how long have you had this idea? What made it difficult to translate this idea to a comic book? Did the narrative become confusing at times?

Kurt Busiek: I  actually came up with the one-hour-per-page idea not long before I started writing that script — so I had it for maybe a couple of months before I wrote the story.

But the idea that eventually turned into that story was a long time in developing, actually.

Years ago, I read FIREBIRDS SOARING, an anthology of YA fantasy, and was struck by a piece called “Three Twilight Tales,” by Jo Walton. It told three stories that happened the same night, but the events of the stories interwove and affected each other, so it all added up to one unusually-structured story, one that felt interestingly organic and poetic.

I wanted to do something like that, and I played around with various ideas — at one point, I was thinking of writing a prose ASTRO CITY story that’d have braided narratives like that, told through police reports and witness statements. But I never got anywhere fleshing that out. Maybe someday.

And then last year sometime, I ran across an essay called THE RISE OF THE FRAGMENTED NOVEL —http://fractiousfiction.com/rise_of_the_fragmented_novel — and found it compelling enough to save, and think about, and reread. And the ideas I’d had about doing something like the Jo Walton story combined with that, and I wanted to do something that fragmented in an interesting and effective way.

The idea to break it down into hours came along at that point, and making it about romance and magic was there in part because of “Three Twilight Tales,” so I started messing with it, and the story pretty much grew from there. Early on, I realized I had to tell the story non-linearly, because otherwise the various threads of it tend to clump together and you don’t get as much interplay between them. Also, this way I could move around between scenes to intrigue you, beginnings, middles and ends, and have them all harmonize. That felt like some kind of weird cosmic dance, so that led to the new character being The Dancing Master. It all kind of flowed together, into something that felt satisfying.

I didn’t really have any trouble adapting the idea to comics form, because ASTRO CITY stories are 24 pages long. 24 pages, 24 hours, it fell into place easily. And it wasn’t confusing for me, because I plotted it in chronological order, then moved the pages around until it had the shape I wanted, and then scripted it that way. But I started with it in straightforward form. There were points where Brent got confused about what characters should look like at what part of the day, and one point where John Roshell was convinced we were missing a caption, because he remembered a set-up line that wasn’t there on the page any more. I pointed out that the set-up line happened an hour or two earlier, but several pages later, and it was still there. So that was all fun to do.

And best of all, the story changed and mutated so much over time that it’s not really all that much like what I was trying to capture as a result of reading “Three Twilight Tales.” So now I can go back to that, come up with another story inspired by what I like about it, and I’ll have a whole ‘nother story! 2. The Hanged Man has been one of Astro City’s most mysterious characters. In this issue, he was called The Dark One and Kerem the Wise by the Dancing Master. Is this the definite origin of the Hanged Man or as close to one as we will ever get in Astro City?

KB: I don’t think I’d even call that an origin — we don’t know where the Dancing Master came from, after all, and we don’t know for sure that the Hanged Man came from the same place. We know that the two of them know each other, and that the Hanged Man has been known by many names over time. So we know a few more things about him that we did before. But we still don’t know where he came from or why he does what he does, so there’s plenty left to wonder about.

I do have plans for other information about the Hanged Man to come out, but I’m not sure when, yet. In the series lettercolumn, which runs in the book and in extended form at www.busiek.com, I asked if readers wanted to see his origin revealed, and the majority of them said no, leave it a mystery. So I don’t think you’ll be seeing any definitive origin, but we will glean some information about his past now and again. 3. Was Gundog a commentary on the overly violent and gun toting comic characters? Can you give us a peak into his creation, and why his perfect ending was to end up with Laura?

KB: No, Gundog wasn’t meant as a commentary on anything in other comics. He’s a character, one we could tell a story about. That’s pretty much all we wanted from him.

I needed someone for the villain role, and I needed him to be a very, very simple idea, because there’s not a lot of room in this story to explain a character with complicated powers or motivations. So he’s a bank robber with a lot of fighting skill and trick guns; that’s something we can bring through pretty easily, without taking much time.

I played around with the idea of using some villain we’d established in the past, but before I really thought of any good candidates, I came up with the name “Gundog,” and liked it a lot. It was simple, down-to-earth and effective. And it suggested a roguish, relaxed character, kind of someone a younger Dennis Quaid might have played, that suited the story well. He had a lot of charm, and that helped bring through the character story.

As for perfect ending — I don’t know that this is his perfect ending, or even Laura’s. Or even that it’s an ending — either one of them, or both, might come back at some point. But it was nice to have lives changed by the Dancing Master’s visit. Zvi and Dennis already had a relationship, and it got strengthened, which is nice, but to have a positive romance come out of nowhere and turn two lives around — reforming a crook in the process — that just felt like a development that made the story feel like it went somewhere good, accomplished something.

4. On the shocking last page, Rover becomes sentient. Will we ever see Rover again?

KB: Who knows? With superheroes around, you never know… 5. Brent Anderson did a fantastic job varying the style of his pencils for each page of The Dancing Master. Could we see a peak of your script for one of those pages to understand what led him to make those choices?

KB: I’d show you, but it wouldn’t do any good, because none of that’s in the script.

I wrote the script assuming we’d design a look for the Dancing Master and then stick with it for the whole book. And then when Alex and I were working on the cover, Alex did a design that looked very nice, and then we stumbled on the idea of doing a very 1960s Peter Max type look for him. And that worked sensationally for the cover, doing everything we needed to set the tone for the book — but it didn’t feel quite right for the story to have this ancient romance god show up and look like a Peter Max character. Plus, Brent liked Alex’s earlier design, too. So we cooked up the idea that maybe when the Dancing Master first manifests, he looks old and textured, kind of a Gustav Doré design. But as he stayed in the modern world, he’d be affected by it, getting more and more modern — through Beardsley, Mucha,styles like that — and on until we saw the Peter Max approach from the cover and on even beyond that.

So Brent drew that, and I adjusted the script to suit it. But it was one of those ideas that happens along the way, contributed to by me, Alex and Brent in collaboration, not just a matter of me telling them what to do. It keeps the book alive and unexpected, if we’re always open to new approaches.

And that’s it! I hope you enjoyed this special look inside Astro City #13! A special thank you to Kurt Busiek for taking the time out of his busy schedule to answer our questions. If you haven’t had a chance to read Astro City, I highly recommend running down to your local shop and picking it up. Astro City #14: A roadside killer-robot sanctuary and museum? Only in Astro City. Meet Ellie and her very unusual friends. Plus: Samaritan, Cleopatra, Reflex 6 and more!