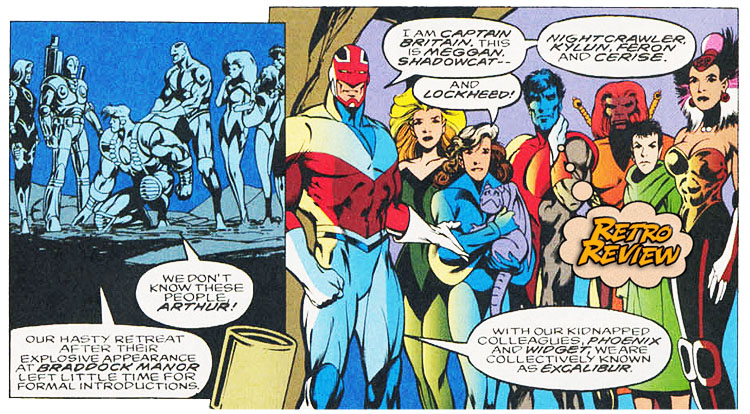 With the recent release of ‘X-Men: Days Of Future Past’, I’ve read a number of comments on the internet that opined that Marvel should get off their butts and do a real sequel to the classic tale.  Of course, what many don’t realize is that said sequel has already appeared, over 20 years ago!  Your Major Spoilers (retro) review of Excalibur #67 awaits!

Previously in Excalibur:  Comics fans remember the story of ‘Days Of Future Past’ as it occurred in comics: With their world in shambles, and most of the mutant/superhuman population hunted to extinction by the Sentinels, with the rest in death camps, the X-Men tried a desperate Hail Mary maneuver.  Sending the mind of the adult Kate Pryde back in time to inhabit her younger self, the future X-Men prevented the murder of Senator Robert Kelly, which would be a pivotal event that created their world.  Elder Kate Pryde succeeded, and was swept back through time to the far-flung future year 2013, but that future world still existed (thanks to the “branching tributaries” theory of time-travel in the Marvel Universe).  Rachel Summers, the daughter of Cyclops, went back into the past physically, joining first the X-Men, and then the British splinter team, Excalibur.  Unfortunately, Kate Pryde was captured by the Sentinels and (thanks to a combination of torture, time circuitry and her mutant power to phase through solid matter, disrupting electronics) somehow transformed into the mechanic creature known as Widget, who has been hanging about with Excalibur since their earliest missions.  When the Sentinels of the year 2015 come looking for Rachel in the “present”, Widget interferes, and the resulting time/space feedback transports the entirety of Excalibur into the terrible future… This issue opens with a fascinating sequence, as Alan Davis explains how the Sentinel invasion went in countries other than the United States, using the then-still-extant superheroes of the ‘Marvel UK’ line, such as Killpower, Death’s Head and the Knights Of Pendragon.  Where the Avengers and Fantastic Four fell, these brave heroes…

…also fell.  The few survivors live, thanks to Excalibur, but not all of them are heroes in our time… I’m going to be honest, it’s a long time since I’ve read the early issues of Excalibur, so I don’t recall precisely who Nigel Orpington-Smythe was, but man that’s an amazing name, ain’t it?  As for founding Excalibur member Rachel Summers (now wearing both the name and, disturbingly, the costume of her late mother, Phoenix), she has been taken to the Master Mold, so that she can be interrogated by her former “master”, Ahab, cyborg leader of the hounds… There’s a WHOLE LOTTA continuity in this ish, but the sweetest little touch comes as Rachel contacts the dispersed mind of Kate Pryde, now inhabiting the artificial being known as Widget.  Kate recognizes her friend/adoptive daughter-ish person, but she has grave warnings about the Sentinels and their adoption of time-travel technologies.  This whole sequence is beautifully rendered, reminding me of how wonderful Alan Davis’ art can be, especially when he’s illustrating stories he wrote himself… Meanwhile, the younger version of Katherine Pryde, known to her friends as Kitty and/or Shadowcat (which, I’m sorry to have to say, is an awful codename and wouldn’t have worked on a less-beloved character) and the rest of Excalibur have hidden inside the hull of a destroyed Sentinel and prepared to assault the central stronghold and spring Rachel.  Of course, Kitty has some very eighties ideas about how you deal with time-traveling cyborgs… To be honest, I blame Linda Hamilton.  Things start to get heated as the assembled British heroes break their way into the central hierarchy of the Sentinels, and start with the old fighty-fighty.  Those who remember the endless rows of graves in the original DoFP storyline (I sure do) are probably skeptical about their odds of success, but this motley band has a major advantage that they did not: The cosmic power of the motha$&@ing Phoenix Force! Phoenix and Widget pierce the shields of the Master Mold, while their allies in the field are torn to bits by squadron after squadron of Sentinels, and for long moments, it seems as if all is lost.  Excalibur fights, knowing that it may only be minutes until they, too, are killed. The power of the damn-near-almighty Phoenix was successful, and with Kate’s help, the entire Sentinel hierarchy has been reprogrammed with Rachel’s directives (which, to be fair, comprise pretty much Asimov’s Laws of Robotics), and the future world finally allowed to progress out from under the thumb of their cruel robot overlords, and Rachel Summers is finally able to let go of her home, deciding to commit to her new friends and new team, all the while wearing the clothes that her late mother used to destroy millions of innocents and become a galactic-level threat. I highly recommend clicking on that link, by the way, as 90s Alan Davis is particularly delightful to look at, even if there are some unfortunately uniform choices in play there.  Davis’ run on Excalibur was always a particularly fun book, as the team gathered not only regular members but a cadre of hangers-on (like Feron, the mage in the green robes and Kylun, the cat-warrior whose powers are actually vocal mimicry, which cracks me up) and supporting folks, each of whom had a life and voice of their own.  Though not the best remembered of the 90s-era X-titles (that’s clearly Jim Lee’s relaunched X-Men title, featuring Jubilee, Gambit and Rogue’s leather bomber jacket), it’s occasionally the best written, and in my opinion, the best drawn.  Excalibur #67 is a good’n, even if sequels are a questionable prospect, with fabulous Alan Davis art, and a hopeful story that never quite fit in with the rest of the grimdark X-titles, earning 3.5 out of 5 stars overall.