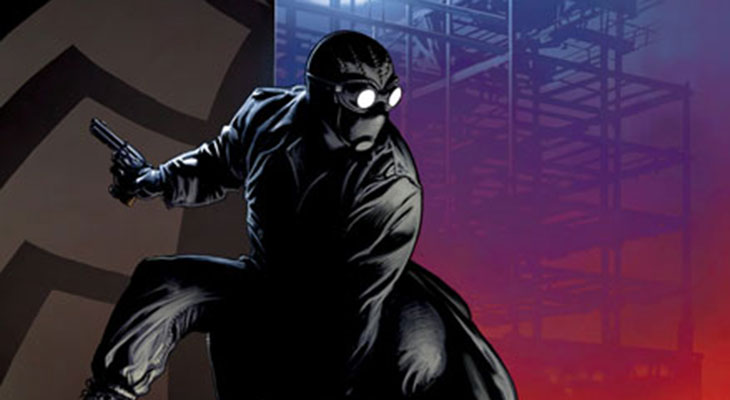 This September, prepare yourself for the biggest Spider-Man story ever with EDGE OF SPIDER-VERSE, a blockbuster new limited series from some of the hottest rising stars in the industry as they bring their own spin to Spidey with 5 interconnected issues each featuring a radically different spider-powered heroes as they prepare for the terrifying assault of Morlun later this year!

“Before you see EVERY Spider-Man ever in Spider-Verse, get up close and personal with five of them!” Says Senior Editor Nick Lowe. “Get ready for Spider stories from the most disparate and talented group of creators ever assembled!”

First up, David Hine, Fabrice Sapolsky and Richard Isanove take readers to the dingy, grime covered streets of New York in the 1930’s as Spider-Man: Noir makes his thunderous return! But all is not as it seems in the Noir universe – and not just because Spider-Man finds himself up against Mysterio!

Then, Jason Latour & Robbi Rodriguez explore a universe where the radioactive spider bit another of Peter’s classmates instead. Meet Gwen Stacy: Spider-Woman! She’s smart, charming and can lift a car – just be sure not to tell her Police Chief father! Big seeds of Spider-Verse are planted here as this exciting new character makes her bombastic debut!

In Edge of Spider-Verse #3, critically-acclaimed artist Dustin Weaver makes his Marvel writing debut as he pulls double duty on an all-new story featuring the wildly imaginative world of Dr. Aaron Aikman – Spider-Man! As he traverses his version of New York City in search of the mysterious kidnapper, nothing can prepare him for the unexpected arrival of Morlun himself!

Then, Pulitzer prize nominated horror writer Clay McLeod Chapman and fan-favorite artist Garry Brown take you to a universe where a radioactive spider bites a high school science nerd who is already something of a monster. Experience the story you’ve always known about Spider-Man with a horrific new twist as the epic Spider-Verse waits in the wings.

Finally, Eisner-award winning Umbrella Academy writer Gerard Way makes his Marvel Comics debut alongside critically-acclaimed artist Jake Wyatt for an issue that will have everyone asking – who or what is SP//dr? Venture into a fantastic new universe and meet the incredible spider character who inhabits it!

As the coming events prepare to shake up the wallcrawlers of each and every universe, no fan can afford to miss an introduction to some of the key players in Novembers highly-anticipated Spider-Verse event! Morlun is ready for war. And it’ll take every Spider-Man ever to stop him. This September, hang on tight as you enter the EDGE OF SPIDER-VERSE!