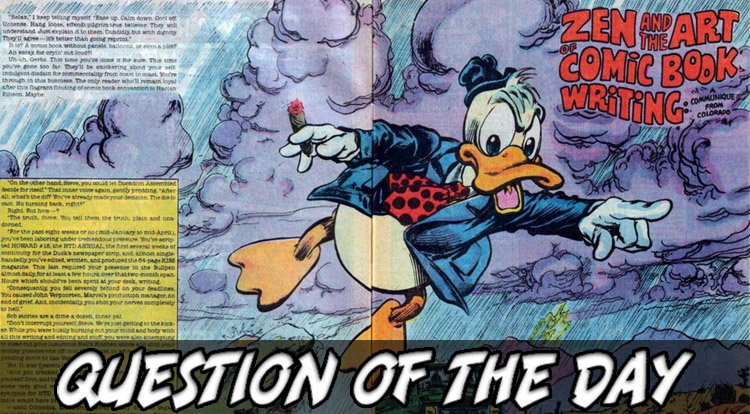 Having worked in a comic store for more years than I care to consider, I’ve heard the question hundreds of times: What’s a good book to start getting into comics?  Often times, I find that the answer has a lot to do with the person asking, but I’m usually pretty confident pointing out Neil Gaiman’s ‘Sandman’, or for superhero enthusiasts, a little of Kurt Busiek’s ‘Astro City.’  But today, after new store employee Alex and I got to discussing comic books she enjoys, I actually got to go to the book that I like to recommend to the appropriate weirdos: Steve Gerber’s original run on ‘Howard The Duck’ from Marvel.  It’s a comic that I thoroughly enjoyed, and one that no one will ever give a chance thanks to the execrable George Lucas movie, but a book that deserves a few more fans aware of its 70s-style goodness, which leads to today’s referentially-minded query…

The MS-QOTD (pronounced, as always, “misquoted”) actually has multiple levels of ‘Check This Out’, based on age, gender, experience with comics and hair color specifications, asking: What’s the first thing you would offer if asked to recommend a gateway into your favorite pop culture?