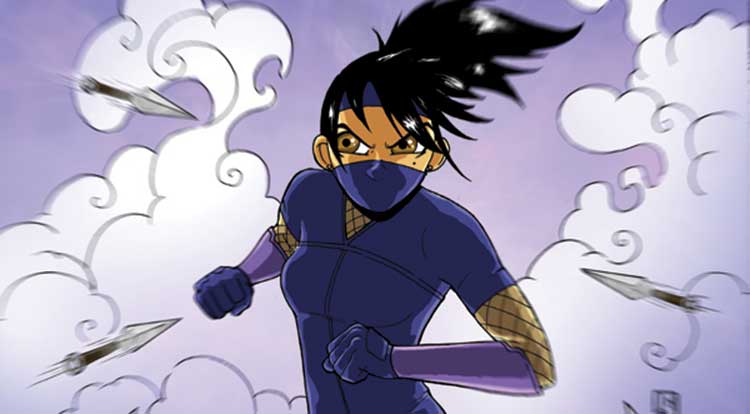 Shianndrea Toshigawa is just your average, ordinary ninja -in -training. On the run from her father, the Emperor Terminus and the Azumi ninja clan, Shianndrea trains with the legendary Toshigawa clan to embrace the mysterious power within her. Shinobi: Ninja Princess is written, illustrated and created by mastermind Martheus Wade.

A prequel to Wade’s most famous creation ‘Jetta: Tales of the Toshigawa’, Shinobi; Ninja princess explores her formative years as Shianndrea struggles against her destiny .The all ages action/adventure series takes a manga inspired spin on this classic coming of age story and returns to a universe of warring clans and high adventure.

Wade’s approach is accessible to readers who may cross over from that realm but it manages to stay just light enough to attract the casual reader.  Wade, who’s work has been featured in graphic novels like ‘Mail Order Ninja’ and ‘The Bad Girls Club’ for IDW publishing, is joined by his wife and frequent collaborator, Janet Wade (Jetta: Tales of the Toshigawa, Turra: Gun Angel)  and features a variant cover by Tressina Bowling (Hateink , Princeless: Short Stories for Warrior Women).