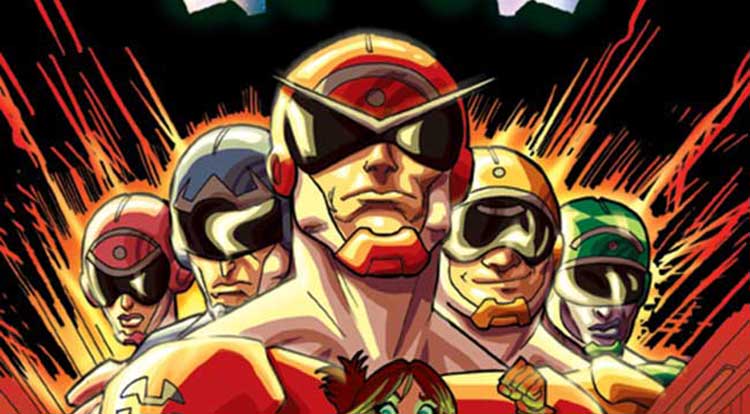 Two years ago Cosmic Times joined forces with PaperLab Entertainment to launch their science fiction comedy mini-series Giant Robot Warrior Maintenance Crew. After enjoying success in the underground market, this June retailers across the country will have the chance to order Giant Robot Warrior Maintenance Crew, allowing this unique series to find a national audience.

Created by Nate Hill and Mervyn McCoy, Giant Robot Warrior Maintenance Crew is a three issue full color mini-series that tells the story of the giant robot Herotron – defender of the known worlds. The only catch is, the story is told entirely from the point of view of the maintenance crew working inside the mighty robot.

We see everything through the eyes of a young woman named Erica Pratch. She’s new to the maintenance crew, and joined because she wanted to travel and be part of something exciting. But the reality of working inside a giant robot warrior isn’t anything like she expected. This is a high-stress job done in the most ridiculous situations possible, where people routinely snap under the pressure. On top of that the pilots of the robot don’t have a clue as to what they’re doing, and alien monsters run loose in the service tunnels.

Giant Robot Warrior Maintenance Crew issue 1 (of 3) features cover art by indie-favorite Jerry Gaylord (Fanboys vs Zombies) and is available for pre-order in the June 2014 Previews Catalog – Order Code JUN141023 (on page 303 – also listed as a Staff Pick on page 345) – If you are interested in this series please let your comic book retailer know to order this book (on shelves August 27th). To find a comic book retailer near you, use the Comic Shop Locator Service by calling (toll free) 1-888-COMICBOOK (1-888-266-4226) or online at http://www.comicshoplocator.com.

About Cosmic Times
Established in 2008, Cosmic Times has become a small-press favorite with such diverse titles as Arthur: The Legend Continues, Deep Space Tragedy and the critical hit Decisions. Publisher Martin T. Pierro continues to remain focused on his goal of making Cosmic Times into a true independent publishing house that focuses on quality storytelling.