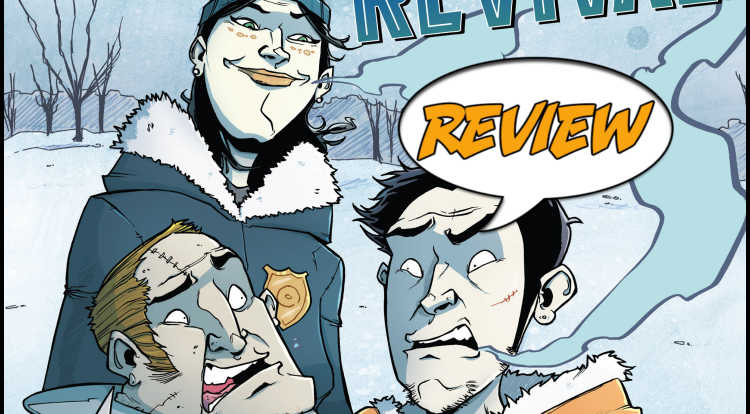 38 pages of craziness is what the reader gets in Chew/Revival One-Shot which features two completely separate stories by Chew and Revival’s respective creative teams. The first story is handled by John Layman and the Chew camp:

Tony Chu and robo-Colby fly into Wausau, Wisconsin at the behest of their FDA masters to retrieve the severed hand of a master chef. They are greeted by Sheriff Wayne Cypress (head of the local police force), who has little-to-no interest in working with yet another government agency. Reluctantly, Tony and Colby are introduced to Dana Cypress and Ibrahaim Ramin who head up the R.C.A.T. (a local organization that deals with the revivers).

A few more pages into Chew/Revival One-Shot Dana and Ibrahaim bring Tony and Colby to the local morgue where they are faced with piles of [mostly]reviver remains. There is animosity between Ibrahaim and Tony regarding Tony’s “cibopathy”, particularly when he refuses to ingest any reviver remains whether or not it would aid the case. Agnes Swenson revives, beats the tar out of the pathologist-cum-funeral director and Colby hits on her. There’s a gag with a chicken restaurant and the first story of Chew/Revival One-Shot comes to its crux when local restauraunteur Dagmar Fiskbüller is revealed to not only be Tony and Colby’s dismemberment culprit, but a reviver! The story comes to a close with Dagmar’s melodramatic interview at police headquarters and the revelation that Colby has slept with Agnes Swenson – you know, the elderly reviver from earlier.

John Layman brings everything from Chew to his effort in Chew/Revival One-Shot. His tale skillfully encompasses all the characters and their traits, whilst managing to weave a story that could only possibly exist in the Chew universe. Layman’s story is fun, a bit gross and really, very charming.

Chew/Revival One-Shot moves on with Tim Seeley’s offering from the Revival camp: it opens on a desolate rural dance hall filled with rotting corpses – two of whom are dancing. Yes, the tonal shift is staggering, but it firmly establishes that we are living in a different world from the first story. Seeley seamlessly encompasses Tony Chu into a world populated by Dana Cypress and Ibrahaim Ramin and has made a smart choice in leaving the character of Colby out of this story. With his brand of writing a cyborg-esque character like Colby just does not work; which feels weird to think about a pseudo-zombie comic.

Dana leaves son Cooper with reviver-sister Martha “Em”, as she and Ibrahaim set off to meet Chu at a graveside. Seeley addresses the ridiculous nature of the Chew/Revival One-Shot crossover by having Cooper draw a comic which features two other Image Comics properties – most notably Saga’s Lying Cat. Dana gives Tony the rundown on the black market reviver trade and Tony turns around to give Ibrahaim the rundown on his particular set of skills. Throughout Chew/Revival One-Shot Tony ingests some snow and reviver fingernail and the readers are given their first confirmation into what the glow-y creatures we’ve seen for the entire run are.

The second story in this issue ties up with Dana, Ibrahaim and Tony stumbling into the uncomfortably familiar barn-dance we opened on and the “bride” is reunited with her “soul” (the aforementioned glow-y creatures), just in time for the barn to burn down and all revivers within to maybe, actually die. This story closes with Ibrahaim and Tony alone at the bar sharing a drink. Ibrahaim proves himself (yet again), a good man and admits that he was wrong to have judged Tony and his abilities. As for Chu, himself, he is able to solidly empathize with Dana and her protection of Em’s reviver identity given the death of his own sister.

Seeley not only manages to tell a story easily as interesting as Layman’s, but he closes out Chew/Revival One-Shot on a touchingly emotional note that is earned by both writers’ efforts throughout the entire issue.

THE TOP OF THEIR GAME

Rob Guillory and Mike Norton both have a solid hand on the work they are doing within the confines of their own books. Both artists have strong, distinctive styles that compliment their respective writers, if not each other. Like Layman and Seeley they both shine in their own stories.

Guillroy’s cartoonish style brings levity to the more dire elements of Chew/Revival One-Shot, while Seeley refuses to let even the jokes go by without a reminder that the characters are living within a rural American noir.

What more can I write when everyone working on this issue has performed so admirably?

Chew/Revival One-Shot really sounds like a crossover that shouldn’t have worked, I myself had doubts from its initial announcement months ago. It absolutely does though, not because either world is especially complementary of the other, but because the creative teams have played in their wheelhouses and in no way tried to capture the tone of the comic they were borrowing characters from. If you are a fan of either Chew or Revival it behooves you to pick up this bizarre crossover one-shot. It’s too good to miss!