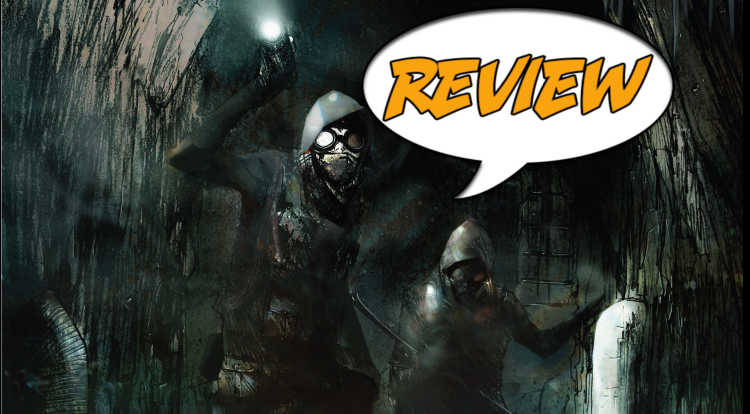 Ivan wanted to be a master magician and follow in the steps of his hero. If he didn’t have professional failures and the death of his friends on his hands then this mystery may never have happened. THE ART OF ILLUSION

On page one of the Last Broadcast #1 a ferris wheel in San Francisco explodes and a teenaged boy is brought along for the ride. This boy, Ivan, wakes up in a hospital bed. His nurse Ella, hilariously, is smoking in his hospital room even as Ivan recovers. As happens in such comic books, Ivan is bothered by a touch of amnesia and can’t remember the events of his most recent past. Ella let’s Ivan know that none of his friends made it out of the explosion and remarks that Ivan doesn’t look like a magician.

Flash back to: eight weeks earlier. 100 feet below San Francisco. A handful of youths in full hazmat suits, complete with gas masks, make their way through a series of tunnels the reader can only assume are the sewers. Two of these young people make their way to – and then through – a secret door and the narrative intercuts with Ivan preparing to audition for a magic gig. Ivan’s on stage efforts crumble and fail even as the members of the underground assault team start dying off.

The underground assault team discover a secret room filled with paraphernalia concerning a certain magician: BLACKHALL. Then Nikko (one of the only females we really see in the pages of the Last Broadcast #1), tumbles through the rotting floorboards. Given the failure of Ivan’s audition he returns to his ambiguously-somewhere-in-England flat to practice. In the wake of his self-criticism Ivan’s best friend and assistant (Alex), quits – unable to deal with Ivan’s rabid dedication to living to the legacy of a historic magician: BLACKHALL.

… and it all comes circling back.

The Last Broadcast #1 continues along with Ivan recognizing the bind he is in. He reaches out to a friend and lays out a plan to further research Blackhall’s life and career based on a cryptic package. A friend in publishing agrees to help Ivan out with this project only to be offed by a mysterious figure from the issue’s opening pages.

In the San Francisco timeline of The Last Broadcast #1 Nikko hangs from her hand, having very nearly fallen to her death and the issue comes to an end.

It’s clear to me that André Sirangelo is an immensely talented writer who has a grand design behind his work in the pages of the Last Broadcast #1. It’s been executed with great aplomb, although may require a second pass by some readers because the sheer amount of information put into each panel makes the overall product dense. When the Last Broadcast reaches its full run everything that is planted in this first issue will be revealed. For the time being, the Last Broadcast #1 is a garden of scattered seeds that readers are going to have to believe in.

I am willing to bet that artist of the Last Broadcast #1, Gabriel Iumazark, likes manga and anime. His art manages to be both sketchy and lyrical at the same time with many of the characters built lithely with long hair. The pages of the Last Broadcast #1 are absolutely stunning – it might be the most beautiful comic book I’ve read this year. The real callbacks to manga artwork is in the characters’ hairs and eyes and really works in this paritcular story.

The issue is primarily black and white with colour employed very sparsely throughout the issue and when we do see it, it’s usually a tint or shade of red. This adds to the sensation of unease that permeates the Last Broadcast #1. In opposition to the writing where Sirangelo has thrown a lot of detail at us that should pay off in future issues, Iumazark keeps all design aspects simple and consistent and gives the reader something to hold on to.

The Last Broadcast #1 has so many thrilling elements and interesting ideas that have been deftly presented by its creative team. It is not the clearest first issue of a series, but the sheer depth of the material promises to pay off in a big way down the line. If you are a patient reader who can wait for a payoff the Last Broadcast #1 is worth your time.