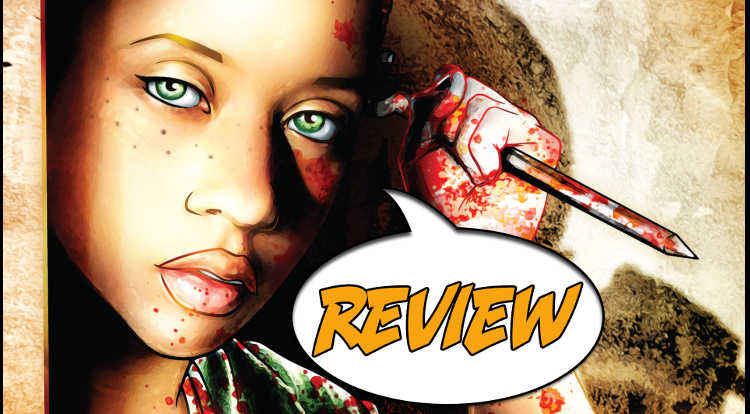 A Voice in the Dark #7 Review

Zoey is about to commit her second act of homicide while conducting her live radio show. The event goes off with, seemingly, great success until an unexpected letter shows up.

Zoey has picked out Brock and Mandy as her next victims and their end approaches swiftly in A Voice in the Dark #7. Much in the tradition of such popular shows as Dexter and Bates Motel writer Larime Taylor endeavours to justify the impending murders. Brock and Mandy are the evil variety of frat boys and sorority sisters that enable attacks and rape to take place. They seem to be the type of characters the world of A Voice in the Dark #7 could do without.

Zoey lets herself into her radio studio and sets up an elaborate ruse involving a fake illness pair with burned CDs that will keep her voice playing over the airwaves even while she sneaks back out for the act itself. Her diary, which is normally a cliché in the hands of a lesser writers than Taylor, walks the reader through the execution of the act. Zoey’s internal monologue is refreshingly feminine under the design of a male writer and clinically detached as she walks us through the murder.

Taylor gives Zoey a rarely seen moment of sensitivity where, over the course of an entire page, she dismantles the morality of the crime she is about to commit. She examines the implication of taking these lives, snuffing out their future and all future acts. While a psychopath with a moral code is in-and-of itself contradictory it makes for a very interesting piece of storytelling. Ultimately, the Jiminy Cricket on Zoey’s shoulder gets squashed.

A Voice in the Dark #7 proceeds through Zoey’s walk to Brock and Mandy’s apartment, outfit change, act of breaking and entering and a brief moment of lying in wait. Brock and Mandy’s overheard conversation is less-than-encouraging and they come off as not only psychologically, but potentially physically abusive to each other. Knowing that they are about to be snuffed out of this world is almost a relief. With the precision of a surgeon Zoey murders both Brock and Mandy (which should hardly be a spoiler at this point), and a buzz of success sparks within her.

The radio studio becomes Zoey’s sanctuary once again … until she leaves in the middle of the night only to discover a letter tucked beneath the mat from a self-identified “fan”. Her secret suddenly out in the world closes A Voice in the Dark #7 and is certain to set any and all plans made by Zoey off the rails as the series continues.

Taylor has plotted and executed A Voice in the Dark #7 expertly. Nothing about this issue is overcomplicated or overindulgent, the tone cool and detached in mimicry of Zoey’s own homicidal mind. The reader could very nearly identify with Zoey – if she weren’t a murderer, of course.

Here we have Larime Taylor once more tackling art duties. It’s impressive enough when a creator does double duty on a comic book series and even more so when the artwork is all accomplished from their mouth rather than by hand. That’s pretty freaking impressive.

It also helps that the art is really good. Like the storytelling it is simple, well done, and executes the story beats with the least amount of fuss possible. Zoey (a female character of colour!), is always the most identifiable character on panel even if in the pages of A Voice in the Dark #7 she is most often featured on her own. The grayscale rather than full colour approach speaks to Zoey’s semi-detached nature and A Voice in the Dark (and Think Tank – another Top Cow series), prove that there is no reason for readers to be afraid of black-and-white comics.

For the gruesome subject matter and sociopathic leading lady A Voice in the Dark #7 is a slick, well-designed issue. It’s even pretty, if you can view the subject matter that way.

A Voice in the Dark #7 is great and this issue is very accessible – a good jumping on point for readers who have considered taking a look at this series, but not made the leap yet. Zoey is intriguing, her actions are brutal and now she at the end of the issue is faced with a big obstacle. A Voice in the Dark #7 will pull you in and you’ll be hooked. It’s a fantastic independent comic book that deserves your readership.