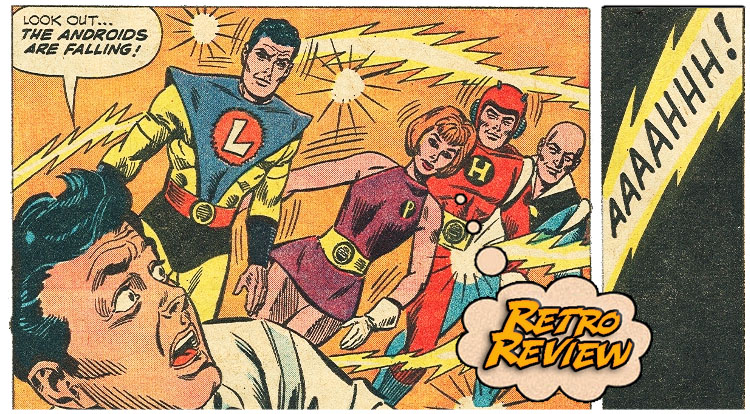 The recent spate of comic movies and television shows has some declaring that it’s never been a better time to be a fan of superheroes and other such frippery.  But those who remember the past can tell you it’s not the first such boom period, nor will it be the last, and while the rising tide may lift all ships, not everything that comes of comics’ periodic salad days will be memorable for the right reasons… Previously in Super-Heroes:  There are a lot of stories in the comics Naked City, and prior to the mid-70s, probably 40% of them came from Dell Comics.  From the very earliest days of comics, Dell was on the scene putting out dozens of books per month, and their cornerstone title ‘Four-Color Comics’ was published multiple times per month in its heydey, but when partner Western Publishing (which later became Gold Key Comics, home of Magnus, Turok, Doctor Solar and more) split, things went downhill for the publishing giant.  Still, Dell kept their licensed comics running, and when Batman brought superheroes back to the forefront in 1966, Dell was among the hundreds of publishers to seek a slice of that sweet Adam West pie.  (Which, now that I say it out loud, eww?)  Still, without a lot of established properties in their archives, the Dell brain-trust put their heads together, with a clear eye towards up-and-coming Marvel Comics, to generate… THE SUPER-HEROES.

Yes, that name is awful. Of course, as that first panel (featuring actual extant Dell characters Nukla and Toka) shows us, there wasn’t a whole lot else they could’ve done with what they already had.  As our four teenage protagonists quickly discover, though, the ‘Heroes Of The Future’ are a quartet of rubes that even the Legion of Substitute-Heroes would give the stink-eye, with, bar none, the worst collective super-aliases in my memory: Hy, Crispy, El and (*deep breath*) Polymer Polly.  Unfortunately for the kids, though, evil scientist Dr. Luuki (who is an Expanded Universe clone of Dr. Luki) is using the Dell Hall Of Heroes’ atomic power plant (!!) to juice his giant evil robot.. “Are they dead?”  If… only.  No, the androids are now inhabited by the minds of the four teenagers, who find themselves a little bit shaken to see their own bodies lying in piles of rubble.  When the reality of their new plastic selves kicks in, Polly panics, and in her panic, figures out…  something?  I guess? When I said before that the uncredited author (Dell mainstay DJ Arneson was long thought to be the writer of this tale, but has since denied any part in his creation, ((And can you blame him? (((TRIPLE PARENTHESES!!!)))))), took some notes from Marvel, I was being perhaps a bit generous, as it’s clear that they read and digested a lot of Stan Lee’s work, broke it down and did their level best to match his unique cadence and the slang that only Stan can sling, coming out with something that sounds like Bob Haney translated through Babelfish into Finnish and back.  After a brief and dumb battle with the aforementioned evil scientist’s robot (Dr. Luuki, being himself possessed of excess letters, names the creature Enndo-Man) the team channels another Stan Lee tentpole: Heroes with feet of clay. Also, heads of concrete…  I’m not saying that the Fab 4 are stupid, but they thought that Shirley Temple was a synagogue.  It’s very rare for me to have this kind of disdain for a comic book (although there was always Skateman), but as someone who has a complete run of Super-Heroes, it’s occasionally a little difficult to accept how much lost potential you will find in the four issues of this book.  Our super-teens return their super-selves to the Hall Of Heroes and hastily head for home, leaving behind them a trail of destruction and a clearly not-at-all defeated giant robot monster… Don’t worry, that shooting pain in your skull is just a side-effect of your brain cells dying a few at a time rather than try to figure out what unholy urge created the story in these pages.  Pace yourself, Faithful Spoilerites.  This’n hurts my head, and I’m a professional.  As for Ennddo-Maan (not to be confused with Entenmann, the robot powered by crullers), his atomic dynamo roars back to life, sending him once again into murderous action… Dan, Polly, Tom and Reb leap into action, rushing off to the broom-closet of solitude! But why was he looking at…  Okay, if that was intentional, it’s vaguely progressive for 1967.  Either way, Polymer Polly, being able to fly (because she is made of plastic or something), is the first to engage Ennddddo-Maaan, wrapping him up like a Twinkie so that El can step in… …and get slapped down like a seven-year-old MMA fighter.  It makes it even more sad, given that El is the android with the most super power-set, what with the laser eyes thing.  As for Hy and Crispy (also the names of the least popular Wu Tang members, coincidentally), they’re not much more skilled than their leader, applying the one-two punch of ice, then sonic vibrations (coincidentally also useful for deep muscle cramps.) Then, the story takes a quick left into awful-ville, as Polymer Polly uses his robot feminine wiles to make Ennddoo-Maan believe that she’s totally into him.  She then falls into a nearby lake and blurba harp flooby kadoodle poo…

Sorry.  Sorry, everyone.  The language center of my brain just shut down for a few second from the vacuum caused by a perfect storm of stupid and misogynistic.  Anywho, Ennnddddo-Maaaan dives into the water to save his robot paramour, allowing Crispy to go in for the finishing move. “We’re the most powerful superheroes in the world!”  If any single panel ever told you everything you ever needed to know about a comic book, this is that one, and never have I been more happy to not live in a fictional world.  It’s not that the Fab 4 are the worst super-heroes in existence, even with their ridiculous code-names, and though this issue’s story is pretty dumb, it has more personality than most issues of ‘Youngblood’ would three decades later.  Indeed, the logo of this issue, with its bold black-and-white “Super-Heroes”, marks it as clearly as the yellow-and-black labeled cans at my local super-market: This is the generic version of Silver Age comics.  It’s Snack Ramen with tights, a flying McDouble, the reading equivalent of Cheez Whiz.  I do kinda love the weird, stiff art of Tony Tallarico, who seemingly drew all of Dell’s 60’s output, especially his weird 30-year-old-teenagers, though.  All in all, Super-Heroes #1 has a little something dumb on every single page (and in the sixties, there were a LOT more pages), remaining notable for its lack of nuance and ham-fisted execution, earning the very rare 1 out of 5 stars overall.  It’s the comic-book version of drinking Tabasco sauce on a dare.