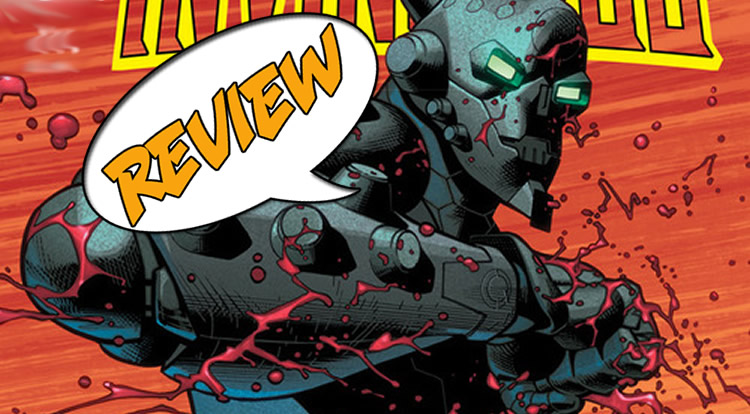 There’s been quite a lot of talk about this issue for months. And let’s face it – the only superhero comic book you will ever need was due for a tune up.  The cover does make a lot of promises, including: First issue in a bold new direction, first issue in a startling new era, and first issue for a new generation!

Does it live up to the hype?

Previously in INVINCIBLE: “A new beginning for Invincible as things take a turn down a dark path. Everything changes as Invincible is betrayed by one of his own. You won’t want to miss this explosive issue #1… 1… 1! It packs the punch of THREE relaunched number one issues! IN ONE BOOK!.”

INVINCIBLE IS A MORE “REALISTIC” COMIC

For years and years, long johns comics have had a very specific rhythm to them. Parents are gone or going, death is only temporary, the good guys tend to be really good most of the time … you know the drill.

When Robert Kirkman, he of The Walking Dead fame, started Invincible, He did things somewhat differently. For instance, the hero’s father turned out to be a traitor, Invincible’s girl friend got pregnant, and the violence can be measured in quarts of blood and various body parts scattered across the page. Really.

Now that several years have passed, it’s time to shake up the status quo to allow for some different stories to take place. Hence this “reboot” or sorts.

IS THIS AN “INVINCIBLE” COMIC?

Fans of the series have bought the book because they like what’s been happening there. If Mr. Kirkman varies the format too far, he might risk alienating the fan base he’s developed over the years. And Ottley’s art continues to be strong and dynamic.

If that’s a concern of yours, I wouldn’t worry very much. Yes, some significant changes apparently take place (none of which I’ll spoil here), but even what appears to be big shake ups in the status quo can easily be undone in the coming months.

I know that most superhero books can seem “sterile” with a lot of action but very little in the way of consequences, but Invincible remains a book in which red is largely the dominant color. Blood, blood, everywhere! Add to that dismembered limbs and serious head damage, and you’ve got a lot of what we’ve grown used to in months past.

And we see at least one character change “sides” while others apparently heading for comics heaven, but as I mentioned previously, you shouldn’t get to agitated about that, in my opinion.

THE MAIN CHARACTER CONTINUES TO GROW UP

Mark has to interact with Eve, who he got pregnant, and they’re not on the best of terms right now. Eve’s baby complicates things even while it has yet to be born, and she suffers a major injury which will likely impact things moving forward.

As for Mark himself, he still has to juggle being Invincible with relationships. His mother, Cecil and others keep him human, but his powers make him think he can handle just about anything, and that might be true.

But he must face a more adult and darker world, and his experiences might help with that, but we’ll have to wait and see about that.

Of course Invincible has long been sequential – having story threads that carry over from month to month – and that pattern isn’t changed in issue 111. Hopefully, Kirkman has some new places to take the readers or else this will be a lot of light but very little heat.

I mean, come on, one person seemingly dies while another gets seriously injured, which makes up the sum total of changes I noticed. This is a “bold new direction?”

Still, Invincible has been a good ride to date, so why mess too much with success?