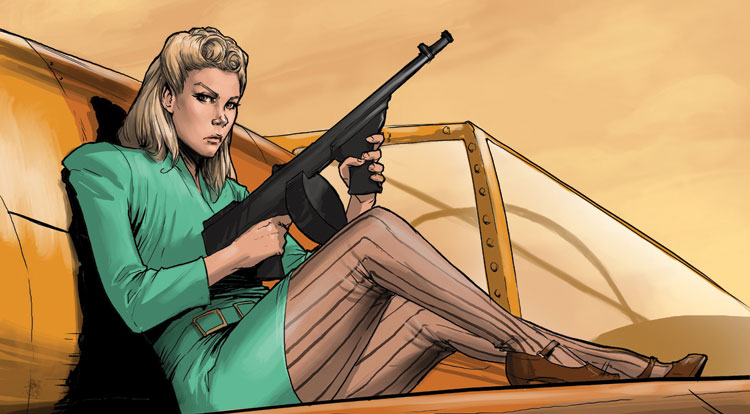 The August releases of two bestselling Shadowline series written by Kurtis J. Wiebe, RAT QUEENS #8 and PETER PANZERFAUST #21, will feature covers by each other’s artists. Additionally, a special retailer incentive cover B diptych by Michael Avon Oeming will be available for both books.

RAT QUEENS artist Roc Upchurch will draw Cover A for PETER PANZERFAUST. “Being a Peter Panzerfaust fan, I jumped at the chance to do a Wendy cover,” said Upchurch. “This is, by far, the best incarnation of Wendy Darling to date. I hope I did her justice (though, I probably did not).”

This twenty-first issue begins a new story arc for the series, providing a perfect opportunity for fans of Upchurch’s RAT QUEENS work to try out this series as well. Together at last, Peter, the Darlings, and the remaining Lost Boys embed themselves in the dangerous heart of Paris. With the Hook hot on their heels, it is only a matter of time before they are discovered. But as ever, Peter is not without a plan!

PETER PANZERFAUST artist Tyler Jenkins will draw cover A for RAT QUEENS. “As far away from anything I get to draw on a regular basis and easily the most fun I have had doing almost any cover,” said Jenkins. “These characters seriously Roc(k).”

In this issue the Rat Queens continue their blade-swinging snark in part three of “The Far Reaching Tentacles of N’Rygoth.” And this time, enemies better watch their backs.