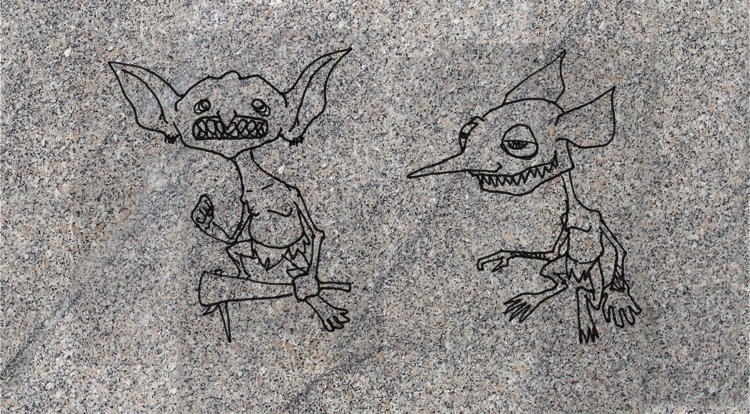 Today we take a look at the savage and dangerous lands of Mandravo from the Critical Hit Podcast.

Once gnolls, orcs, ogres and goblins roamed the entirety of the central continent. But after the War of Talons they were pushed back to the swamps of Mandravo. Separated from the rest of the continent by sea and mountains, Mandravo has become a massive zero-sum game between the various groups in the area.

Children of the Loam/Bone Takers

The largest Gnoll warband in Mandravo, The Children of the Loam control the majority of the border with Diamond Throne, making them the most well known threat on the other side of the Shieldspines. That said, few humans know the warband’s name, to them they are simply terrifying gnoll raiders.

Policy: Del-Vhel is ruthless and constantly trying to expand her territory and influence. The only way to advance in the hierarchy of the Bone Takers is to conquer, pillage and enslave. Only the strongest, most bloodthirsty warlords are granted territories by Del-Vhel and only those who can maintain that ferocity can keep their lands. The Mystery of Blood is a significantly smaller warband than the Bone Takers, but they successfully defy Del-Vehl. Although the King Eaters themselves will attribute their  continued success to superior tactics and combat ferocity, the truth lies elsewhere.

The leader of the Mystery of Blood, Mag Dari Len, is a powerful warlock who has made a pact with an even more powerful demon. Many of her lieutenants and vassals are themselves warlocks or have had demonic body grafts. These dark gifts grant the King Eaters several tactical advantages, which compensate for their smaller numbers.

Policy: Mag Dari Len is interested in power, territory and respect, although she doesn’t demand the same constant warfare from her subordinates as Del-Vehl, she still expects to see orc, goblin and human camps brought to heel. Unlike The Children of the Loam, who usually keep captives to use as slaves and cannon fodder, the Mystery of Blood sacrifices a large percentage of their captives to their dark patrons.

New Malgublostan is the only territory that borders human lands outside of Bone Taker control. It is controlled by a hobgoblin that goes by Imperious High Admiral Fnek. New Malgublostan is a paragon of the goblinoid hierarchy, with hobgoblins occupying all leadership positions, bugbears serving as assassins, frontline generals and specialists and goblins doing everything else.

Policy: Like every other group in Mandravo, New Malgublostan’s continued existence is achieved and defined by their ability to keep the Children of the Loam out of their lands. Gnolls are much stronger and fiercer than goblins, but thanks to a fortified position and absurdly high numbers, goblins can easily overwhelm any frontal assault to their territory. That said The Imperious High Admiral is not satisfied with simply holding his territory and regularly sends squadrons into gnoll lands to recover artifacts, captives or resources.

The Church of Gruumsh

Mandravo’s Church of Gruumsh is the largest “congregation” devoted to the god of carnage in the central continent. It is also the most recent major faction to develop, appearing within the past year or so. As with all other groups, their day-to-day business is survival, largely by keeping the Bone Takers out of their lands. As the only faction with a significant amount of divine power, the Church of Gruumsh is able to better withstand attacks from the Bone Takers, reducing their casualties through divine healing and repelling intruders through their patrons’ savage miracles.

Policy: Kurraga, High Priest of Gruumsh will accept any human, orc or goblin (although no goblinoid has joined) into the fold, provided they are willing to be cannon fodder. This may seem like an unfair proposition, but since the alternative is going up against a gnoll warband unarmed and unprotected, many are willing to convert.

That wraps up this look at Mandravo. Don’t forget to check out the rest of the Critical Hit World Building Archive for more info on the gameworld.