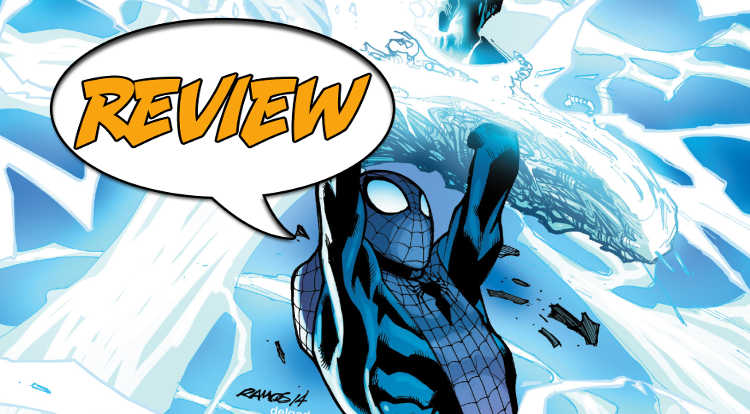 Anna Maria has discovered that Peter Parker is Spider-Man just as Doctor Octopus has left his body. Peter decides to come clean about the mind swap in time for Electro to attack. In their Tribeca apartment Peter and Anna Maria have a heart-to-heart about Peter’s identity as Spider-Man. As one would expect the subject of Doc Ock and the mind swap arrives and Anna Maria’s coping mechanism is to bake. Anna Maria is one of the most charming female characters to come into mainstream comics in a long time and giving her this particular tick speaks not only to Slott having his finger on the pulse of popular culture (foodies and bakers are absolutely everywhere today), but his talent for writing real people instead of broad characters. Rather than explode at this revelation Anna Maria completes the task, gives Peter orders on how long it is to bake for and goes for a walk to clear her head.

I appreciate that Peter and Anna Maria faced this monumental discussion that undoubtedly impacts everything about their future (both as a couple and as individuals), with maturity. Shouting and tossing things about would have been a reasonable response except readers have seen that time and time again. The quiet, frenetic approach Slott employed was very engaging.

The Amazing Spider-Man #2 continues on from there with an incoming phone call from the Avengers. Doc Ock has changed all of Peter’s ringtones and this is a gag that carries through the rest of the issue. Spider-Man reports (late), to Avengers Tower with cookies where he undergoes a series of tests to prove that he is the man who he says he is and not that man the team has been dealing with for the past few months. (Did you follow all of that?)

Slott establishes Electro’s powers being out-of-whack and Peter is forced to leave Anna Maria and the problems he is having at Parker Industries in order to deal with an attack at the hands of – you guess it – Electro! Spidey takes his usual approach and goes for a water-based defense … only … it doesn’t really work and that is troubling, to say the least.

After a quick talk with Johnny Storm (also recently de-powered), and comparing it to some advice from Captain America earlier, the Amazing Spider-Man #2 closes with Peter making a big decision and big announcement about the future of Parker Industries and their involvement with Spider-Man.

As with every issue of the Superior Spider-Man, the Amazing Spider-Man is clicking along masterfully under Dan Slott’s guidance. The story, focused this issue largely on the characters, is in great hands.

Humberto Ramos is an often-divisive Spidey artist and, in my opinion, he absolutely shines in his work on the Amazing Spider-Man #2. The issue suffers slightly from everyone-on-the-page-must-be-adburdly-attractive, but that is a problem that most people will be able to get past.

Peter appears equally strong and determined in his personal life, in his role as Spider-Man and as the director of Parker Industries. He stands as a pillar through the events of the Amazing Spider-Man #2 and when the time comes around for him to take up the mantle of Spider-Man his body is loosey-goosey as he swings through the air in his crusade against crime. Ramos’ liquid style soars in his, albeit brief, conflict with Electro.

The second most highly featured character is Anna Maria and, given her stature, Ramos plays with it in very interesting ways. There is a panel where she and Peter are standing side by side and witnessing Electro’s attack on the city. Anna Maria is tiny next to Peter, though no less powerful. With Ramos’ pencils she is not only dynamic, but lovely.

It really is just stunning.

If you were disappointed with the recent Spidey flick may I suggest picking up the comic book series of the same name? Dan Slott and Humberto Ramos are masters in their respective fields and they complement each other brilliantly. The Amazing Spider-Man #2 truly deserves the adjective in its title.