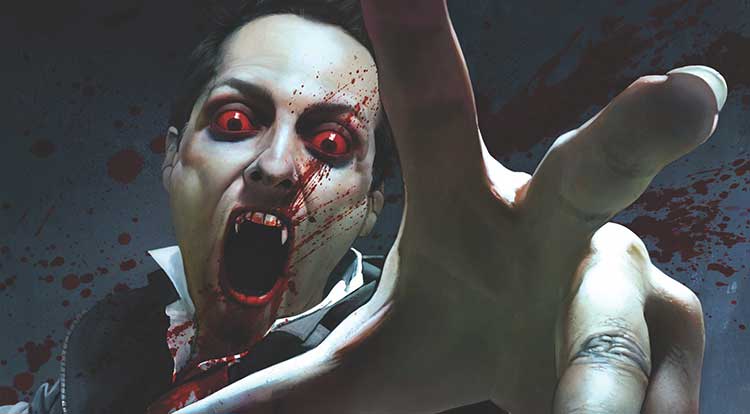 V-Wars gets a television development deal Three-time Emmy® Award nominee Tim Schlattmann (Dexter, Smallville) has been tapped to write the pilot, and will serve as an executive producer on the series. Ted Adams and David Ozer from IDW Entertainment, John Morayniss and Benedict Carver from eOne Television, and David Alpert and Rick Jacobs from Circle of Confusion (The Walking Dead) will also executive produce.

V-Wars is being developed as direct-to-series and is based on the acclaimed IDW Publishing property written by New York Times best-selling and multiple Bram Stoker Award®-winning author Jonathan Maberry.

“This is a story that takes everything the audience thinks they know about vampires and throws it out the window. They’re not the undead. They’re us.” said Schlattman.

V-Wars is set in a world transformed by a catastrophic environmental event that releases a millennial-old virus that once triggered, affects individuals differently depending on their DNA. The result is vampires as unique as their cultures and a response from those unaffected humans like never seen before.

“V-Wars is a head-on collision of real-world science, terrorism, special forces action, ethics, politics and an exploration of what defines us as human,” said Maberry.

“Tim brings an incredible vision for V-Wars,” said Ozer, IDW Entertainment President, “The series sets an exciting tone for our first project launched with Entertainment One and will resonate throughout the global television market.”

“V-Wars is the perfect project to kick off our partnership with IDW Entertainment, and lays the groundwork for a slate of ambitious projects to come,” said Morayniss, Chief Executive Officer, eOne Television. “We are thrilled to have attracted such a huge talent as Tim to bring this gritty post-apocalyptic world to life.”

V-Wars debuted as a collection of prose stories that chronicles the first Vampire War, and a second volume is scheduled for release this July. IDW Publishing also launched an ongoing monthly V-Wars comic book series in May. The first issue was critically acclaimed and is already headed to a second printing.

About Entertainment One (eOne)

Entertainment One Ltd. (LSE: ETO) is a leading international entertainment company that specializes in the acquisition, production and distribution of film and television content. The company’s comprehensive network extends around the globe including Canada, the U.S., the UK, Ireland, Spain, Benelux, France, Germany, Scandinavia, Australia, New Zealand, South Africa and South Korea. Through established Entertainment and Distribution divisions, the company provides extensive expertise in film distribution, television and music production, family programming and merchandising and licensing. Its current rights library is exploited across all media formats and includes more than 35,000 film and television titles, 2,800 hours of television programming and 45,000 music tracks.

IDW Entertainment launched in November 2013 to fund and develop film and television properties based on IDW’s extensive catalog. The division is currently in development on a slate of properties including Life Undead, with showrunner Paul Zbyszewski (S.H.I.E.L.D., Hawaii Five-O, Lost) attached; Brooklyn Animal Control, based on the darkly thrilling comic from writer/director J.T. Petty (Splinter Cell, Hellbenders); and V Wars. IDW also has several active theatrical projects in development: Lore, at Warner Bros. with Dwayne “The Rock” Johnson set to star; World War Robot, with Jerry Bruckheimer producing at Disney and Jon Spaihts writing the screenplay; and Zombies vs. Robots, at Sony with Platinum Dunes and Circle of Confusion producing.