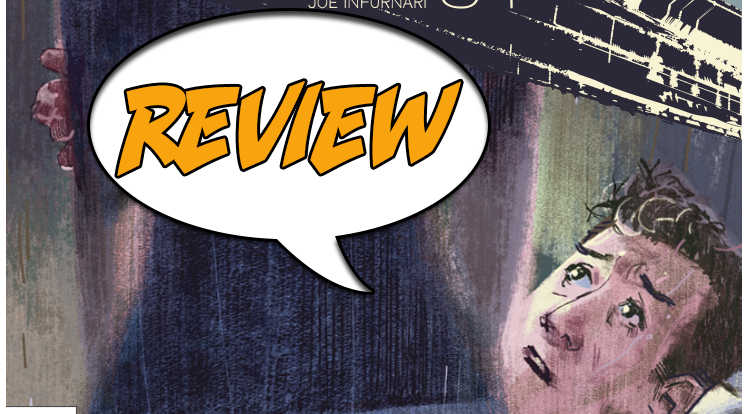 In its fourth issue the events of the Bunker begin to unravel as our characters come closer and closer to something like the truth. In the aftermath of an explosion in downtown San Francisco Daniel leaves his work behind to keep Natasha and Heidi safe. AN ASSASSIN FROM THE FUTURE

… and that’s the least exciting thing to take place in Joshua Hale Fialkov’s the Bunker #4. This issue focuses on Daniel. Daniel is Natasha’s ex-boyfriend and the man destined to destroy the world even as he tries to save it. The fall of the world as we know it comes from climate change and the destruction of crops in a distressing look at what could soon be our own future.

The Bunker #4 takes place on Daniel’s first day working for Aspire. He is put through his verbal paces by Doctor Preeti Natarjan (a female character of colour!), and she makes it explicitly clear that Daniel is being given immense amounts of funding and leeway just so long as he finishes the work his father began. There’s the rub. Daniel’s tragic flaw throughout the entirety of the Bunker, and the catalyst for the destruction of the world as we know it, is a man’s inferiority complex in the wake of his father’s incomplete brilliance. While, literarily, this is a common tragic flaw it is still a very good one and the revelation of this has helped flush out Daniel’s character a lot in the Bunker #4. Previously, I found him a largely unlikeable character, the most difficult to empathize with out of the bunch and I appreciate Fialkov’s exposing of Daniel’s soul in this issue.

Daniel continues to improve as a character when his entire focus quickly shifts away from the question of continuing his father works even with the knowledge of its destructive end to the safety of Natasha and Heidi. News spreads fast and the explosion in San Francisco does not escape his focus for long.

There’s a brief interlude wherein we see Natasha (in one tiny item of clothing), rise, make a phone call to somebody (???), and go for a run. This break seems solely to illustrate the bitter feelings brewing between Natasha and Daniel as he furiously calls her and she furiously avoids speaking to him.

Daniel, Natasha and Heidi wind up safe together and Heidi let’s her friends into a little secret: Grady isn’t as brave as he seemed splashed across local news outlet. Then Billy shows up. Of course, Billy has no idea that he brings potential danger is in his wake in the form of future-scar-faced-Grady. When present day Grady arrives Fialkov leaves readers with a brutal cliffhanger certain to bring everyone back next month.

The Bunker #4 introduces us seamlessly to a different character voice than we’ve experienced thus far in the series and it is the ability to flow from perspective to perspective that truly speaks to Fialkov’s strength as a writer. He can see all the steps as they unfold across the series of the Bunker and it is a privilege to follow along in his wake.

EVERYTHING FALLS INTO PLACE

Joe Infurnari’s art is at its best in the Bunker #4. Everything from the sketchy nature of the lines across the page to his highly-stylized colour palate really coalesces. I can’t put my finger on exactly what it is, but this is the first time in my experience with the run of the Bunker so far where the art truly shines.

Infurnari deserves a lot of credit for the variety of body types he applies to the five main characters (even if they are all Caucasian), without feeling forced.

The unreality of the design and the colours speak to the potentially shifting nature of this world’s future. If Infurnari continues working at this level the Bunker #4 and future issues will stand up as having been brought forward by one of the greatest creative teams in independent comics.

YOU SHOULD BE READING THIS

The Bunker, as printed by Oni Press, came into the world with a lot of fanfare and critical acclaim. Joshua Hale Fialkov and Joe Infurnari deserve every bit of it. The world and the characters they are playing with are fascinating and the issues never fail to get better and better, building upon the information carefully disseminated in the book previous. The Bunker #4 is the best issue to hit stands yet and you really ought to be along for the ride.