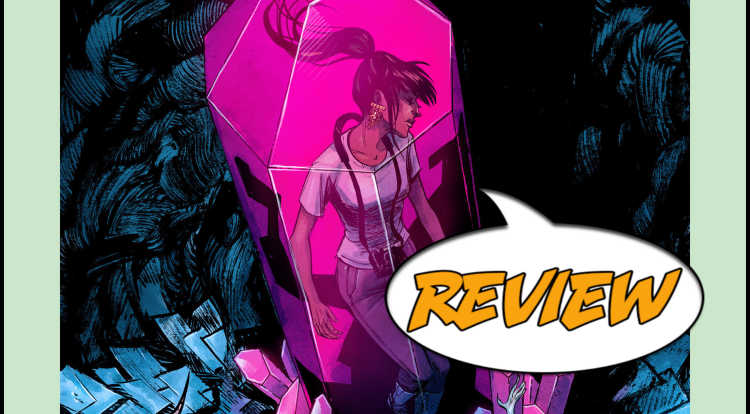 It’s her twenty-seventh birthday and Kate Kristopher has been kidnapped. By a robot. And some rats. And they botch the job. A firefight, naturally, ensues. HAS THIS HAPPENED BEFORE

Shutter #2 opens on Kate Kristopher’s cat clock (that every female reader, including yours truly, wants), baking her cookies. Why? It’s [still]Kate’s birthday and she was kind of morose in the morning and, as the clock says: “Cookies fix everything.” Cat clock is the one who overhears a news report of a crisis happening in the middle of New York City.

The reader flips the page to reveal the crisis proper and Shutter #2 is populated by rockets, police and non-police, filling up the skyline! Inside one of the aforementioned rockets is a robot, three mice (who may or may not, in fact, be blind), and Kate trapped in stasis within a fuchsia crystal that is oddly reminiscent of mineral deposits from the Star Sapphires’ home planet. The crystal is broken during an altercation between Kate’s robot captor and an anthropomorphic lion gangster. The lion, one Shaw O’Shannahan, appears complete with pinstripe suit and tommy gun and that is just as awesome as it seems.

Rather unsurprisingly, though not undramatically, Kate throws herself from the ship belonging to her would-be kidnappers and into a nearby police flying saucer. Yes. Flying saucer. She injures her arm and Shutter #2 proceeds into an out-of-place cut scene twenty years in Kate’s past. Given the revelation of Kate’s siblings in Shutter #1 this flashback sequence makes sense and delivers some interesting perspective on her relationship with her father and characteristic loneliness, however, tonally it jars a bit from the narrative proper.

Moving right along: on the next page of Shutter #2 Kate is in the hospital, being tended to by an anthropomorphic gorilla in a doctor’s coat, when her roommate Alain rushes in. I find it very distracting that Kate’s very female roommate-cum-best friend has the a French male’s given name, but that’s probably neither here nor there to most readers. Alain takes Kate home, the clock cat patches up her knee with a band-aid he picked out himself and Alain cautions Kate to lie low. She alludes to the fact that attacks like this have happened before and the issue closes with Kate brushing her friend’s concern off.

Joe Keatinge has created a rich world and it is gratifying to learn more about its working in the pages of Shutter #2, Kate is an interesting protagonist with many layers that I am looking forward to peeling away as the series goes on. My main gripe with Keatinge’s work in this issue is the jarring nature of the flashback scene. Shutter #1 featured a big look back at Kate’s past with her father that flowed more accessibly through the quote-unquote “present day” narrative. That in mind, Keatinge handles everything else in a deft and engaging fashion so this particular hang up is no reason to not read Shutter #2.

BUT FOR THE FACE

Leila del Duca is talented, undoubtedly. Shutter #2 is populated with people, creatures and items of a vastly fantastical nature that she renders beautifully. Owen Geini is on top of his game as he takes all the whimsy given him on the page and breathes even more life into it with rich colour choices that, at the same time, manage to make Kate Kristopher’s New York City feel like a place that could very well come into being.

However, where my love for del Duca’s pencils goes a little off the rails is the oft-changing perspectives of the panels throughout Shutter #2. During the chase/fight through the streets of New York there are various cuts from wide shots (for lack of a better word), featuring the action to close-ups of characters’ reactions to events. All that is fine, except for that fact that the facial features of the same character don’t always appear similar enough with the changing scale. Kate Kristopher in the wide and Kate Kristopher close-up can only be identified as the same person because of her hair and her outfit … and with the main character that can be problematic.

The rest of the issue is beautiful, as stated above, and I’m hoping that there will be less dramatic perspective changes employed less frequently in coming issues so that del Duca’s strengths as an artist can really shine through. She’s an excellent choice for Shutter #2 (and the rest of the series), but for this one jarring fact.

Shutter #2 is cool. Shutter #1 was cool. There is a ton of potential wrapped up in this series that I look forward to watching Keatinge and del Duca mine. It’s a sci-fi adventure featuring a dynamic female protagonist who hasn’t been Mary Sued to death and is absolutely worth picking up.