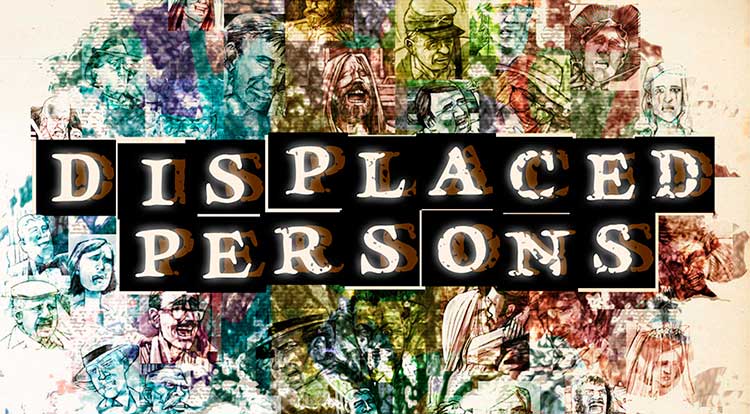 San Francisco, the twentieth century: In 1939, a private detective searches for a missing heiress. In 1969, twin brothers approach a drug heist from opposite sides of the law. And in 1999, a woman slowly comes to realize the terrible danger she faces in her own home.

McCulloch was inspired to write DISPLACED PERSONS because of a love of puzzle stories, detective stories, time travel stories, and a fascination with how history imprints itself on the smaller story of a family’s history. “It’s like reading rings in a tree… you can see the growth of the tree, ring by ring, and the distance between the rings tells you when the droughts hit, or the long winters, or the hurricanes,” explained McCulloch.

“You can look at a family tree the same way, and when you see that someone was born, say, in Poland in 1920, and their child was born in Baltimore in 1947, there’s a story between those two rings. Displaced Persons takes those rings, and takes all the different kinds of stories I love, and mixes them up and twists them into a shape you won’t really understand until the last page. It’s a book I hope people will read twice… I guarantee you’ll see things the second time you didn’t know were there the first time.” DISPLACED PERSONS OGN is in an original graphic novel format and arrives in stores on 8/6 for $17.99. It is available to pre-order with Diamond Code JUN140499.
ABOUT IMAGE COMICS
Image Comics is a comic book and graphic novel publisher founded in 1992 by a collective of best-selling artists. Image has since gone on to become one of the largest comics publishers in the United States. Image currently has five partners: Robert Kirkman, Erik Larsen, Todd McFarlane, Marc Silvestri and Jim Valentino. It consists of five major houses: Todd McFarlane Productions, Top Cow Productions, Shadowline, Skybound and Image Central. Image publishes comics and graphic novels in nearly every genre, sub-genre, and style imaginable. It offers science fiction, fantasy, romance, horror, crime fiction, historical fiction, humor and more by the finest artists and writers working in the medium today. For more information, visit www.imagecomics.com.