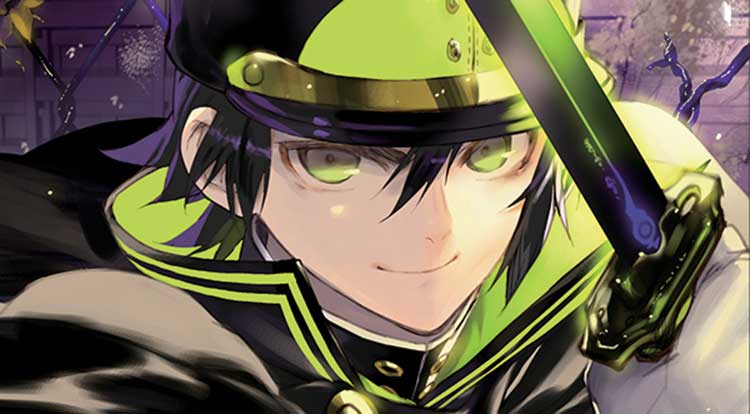 VIZ Media, LLC (VIZ Media), the largest distributor and licensor of manga and anime in North America, delivers a new manga (graphic novel) title straight from the pages of WEEKLY SHONEN JUMP as it announces the print and digital launch on June 3rd of the apocalyptic vampire series, SERAPH OF THE END.

The series, illustrated by Yamato Yamamoto with story by Takaya Kagami and storyboards by Daisuke Furuya, will be published under the Shonen Jump Advanced imprint, is rated ‘T+’ for Older Teens, and will carry an MSRP of $9.99 U.S. / $12.99 CAN. The debut volume also features a fold-out full-color poster, as well as revealing author commentary. Future volumes of the continuing series are scheduled to be published domestically 3 times a year.

A digital version of SERAPH OF THE END: VAMPIRE REIGN will also launch on June 3rd for $6.99 (USD/CAN) on VIZManga.com and through the VIZ MANGA App for the Apple iPad®, iPhone® and iPod® touch, and Android-powered smart phones. It will also be available through the Nook, Kobo, Kindle, iBooks and GooglePlay stores.

After trumpets of the apocalypse proclaim the fall of humanity, vampires arise from the shadows to rule the earth. Yuichiro wants just one thing – to get revenge by killing each and every vampire. Yuichiro’s dream is near-impossible, given that vampires are seven times stronger than humans, and the only way to kill them is by mastering Cursed Gear, advanced demon-possessed weaponry. Not to mention that humanity’s most elite Vampire Extermination Unit, the Moon Demon Company, wants nothing to do with Yuichiro unless he can prove he’s willing to work in a team – which is the last thing he wants!

The latest chapters of SERAPH OF THE END: VAMPIRE REIGN are also currently serialized in VIZ Media’s WEEKLY SHONEN JUMP digital manga anthology, alongside legendary series such as BLEACH, NARUTO and ONE PIECE.

“SERAPH OF THE END: VAMPIRE REIGN is a gripping story that depicts a stark future where a catastrophic epidemic has killed off every adult on Earth leaving behind a population of children that have been enslaved by murderous vampires,” says Hope Donovan, Editor. “The title has thrilled North American fans in WEEKLY SHONEN JUMP and we’re very excited to release full volumes digitally and in print. We went all-out for this one, so don’t miss the debut of this new must-read series in June!” Takaya Kagami is a prolific light novelist whose works include the action and fantasy series The Legend of the Legendary Heroes, which has been adapted into manga, anime and a video game. His previous series A Dark Rabbit Has Seven Lives also spawned a manga and anime series.