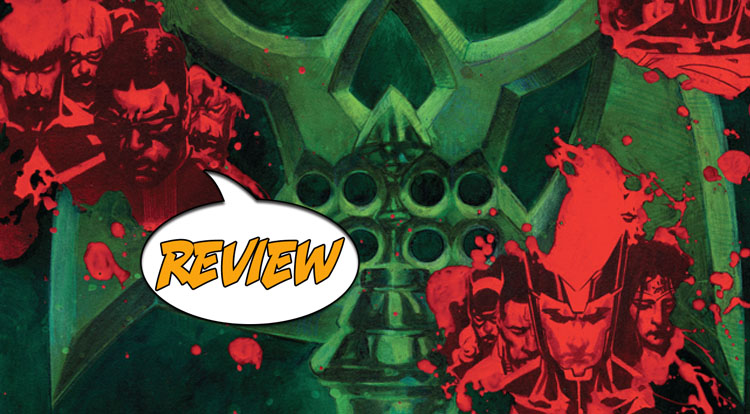 In a future world that’s coming, Green Arrow is dead.  Now, the rest of the world’s heroes have come to pay their respects…  Raise your hand if you think there’ll be a Pier Six brawl!  Your Major Spoilers review of The New 52: Futures End #2 awaits!

Previously in The New 52 – Futures End:  Thirty-odd years from now, the entire DCU is overrun with cyborg atrocities wearing the flaying skins of the world’s greatest heroes, causing Batman to engineer a desperate plan: Send himself back in time to stop his younger self from creating the artificial intelligence that set it all off.  Unfortunately, Bruce Wayne fell in battle, but was able to send his protegé Terry McGinnis (known to some as Batman: Beyond) back to stop the chaos he caused.  Bad news is, Terry didn’t make it all the way back to the present, instead landing some five years in the future of the modern DCU, a world already going through the beginnings of the chaos

BURIAL FOR A BUDDY

So, full disclose: Part of me didn’t realize that this was a weekly series until this issue showed up on the stands on Wednesday, which may be indicative of how little attention I’m paying to the mainstream DCU anymore.  Still, the idea behind a weekly series is one that appeals to me, as long as the story is more ’52’ than ‘Countdown’.  This issue is somewhere in a grey area, better than the incoherent mess that was Countdown, but still not yet achieving full coherence.  Our story opens as Firestorm arrives at the funeral for Green Arrow (killed in an explosion at the end of issue #1), while other heroes swirl around here and there.  Taking place as it does five years in the future, this issue has some intriguing bits to it, as we see with Mister Terrific’s arrival on the scene.  Terrific has gone public with his identity, and has apparently become quite popular among the regular folks in so doing, while the rest of the heroes are treated somewhat differently.  Aquaman gets a few lines, while Animal Man delivers a moving eulogy for Arrow, a man who had apparently become his best friend in the days yet to come.  At the same time, Batman Beyond (I am aware it’s not his name, but that’s going to have to be his designation for now) finds the facility where Bruce Wayne created Brother Eye, continuing in his mission to make sure the satellite never goes live to end the world.  There’s an intriguing double-page spread of the heroes who have come to pay their respects to Green Arrow, as well, featuring a few that I don’t recognize as well as a couple I thought were dead.

Unfortunately, a large portion of the issue is devoted to Ronnie “Firestorm” Raymond trying to cover his assets after not responding to the emergency alarm last issue, leaving Green Arrow alone to die.  Arsenal calls him on it, and they get into a public altercation in front of what seems to be every camera in the city, making Firestorm especially look like a jerk.  Problem is, he *IS* a jerk, and Jason Rusch keeps trying to call him on it, but Ronnie is keeping his better half stuck in the Firestorm matrix, unable to respond.  Visually speaking, this issue is a little bit patchwork, and it’s hard to reconcile the Arsenal we’ve been seeing in ‘Red Hood and The Outlaws’ since the dawn of the New 52 with the square-jawed caricature shown here.  I suppose five years is a pretty long time, allowing for a lot of changes in the characters.  The issue ends with a cliffhanger that I’m actually interested in, as Lois Lane (identified in the story as a “world-famous blogger”) gets a mysterious package indicating that there may be more to Oliver Queen’s demise than anyone expects, which will clearly set her off in search of answers.  The bits and pieces of the story are interesting in themselves, but the patchwork nature of the narrative is working against the story’s success.  Jesus Merino does a fine job keeping everybody consistent within the issue, even if they’re not consistent with previous portrayals, and there are a few intriguing visual gags that make me wonder what’s really going on in the year 2019…

THE BOTTOM LINE: GRIM AND ODD

Recently, on Twitter, Mark Waid referred to ‘Futures End #1’ as ‘the most New 52 book of the New 52’, and this seems to be very much a continuation of that trend, with angry heroes snarling at one another, and Terry McGinnis declaring himself nothing but a soldier, ready to be told where to point his gun.  The knowledge that the shared universe in which these characters live is supposed to shift several years forward at the end of this tale makes me wonder how much of what we’re reading here is actually going to stick, though.  With ‘Arrow’ as a multi-media phenomenon on TV, I can’t believe that the hero will actually remain dead when all is said and done, but a good enough story getting there over the next year or so will make that a moot point.  Trouble is, The New 52: Future’s End #2 never quite puts it all together, with a fragmented story feeling too fragmented, art that is serviceable but nothing special, and a brooding grimness settling over the issue’s events like a pall (appropriate for the events, but still depressing) leaving the issue with 2.5 out of 5 stores overall.   I’ll be watching this one to see if it hits a 52-esque stride, but the beginnings have been a bit wobbly…