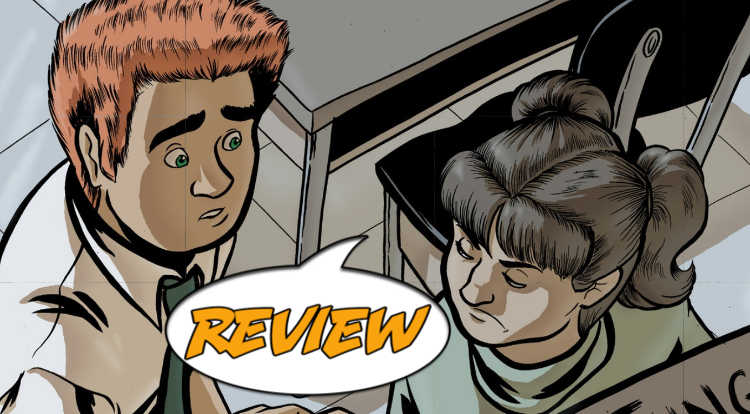 Danny (the Dresden-analogue), babysits his werewolf niece (not-really-his-niece), Rebecca whilst tutoring a student. What could possibly go wrong?

Have you read the Dresden Files? Or seen the television series? Or the comic book adaptations? If you are familiar with any of these incarnations than you know who the lead of Sorcery 101 is except this time he’s called Danny. The great thing about Sorcery 101 #5 is that even the parallels to be drawn between these two characters do not make Danny’s story any less interesting, nor does a new reader need much more information than that in order to get something out of this issue if they haven’t been following along so far.

Writer-cum-artist Kel McDonald does a masterful job weaving in all the information a new reader needs to know in order to enjoy Sorcery 101 #5 and (like me), inspire them to go and purchase everything she has written about the world to date. She possesses and skill and ease weaving this exposition into an issue that a lot of larger publications could take notes from.

A Thing You Need to Know: Sorcery 101 takes place in Terra a more-or-less-urban-fantasy-analogue of modern day Britain.

Sorcery 101 #5 opens on Danny out on a date. Pat, the vampire who taught Danny everything he knows about sorcery, interrupts the date with a phone call and sends Danny out chasing wolf demons. Upon arrival on the scene Danny is displeased to find the wolf demons have been killed by bullets – normal human stuff, hardly worth getting all worked up about – and Pat suffers verbal abuse as a result. Following that, Danny returns to his home (which he shares with married couple Brad and Ally Wolfe and their five-year-old daughter Rebecca), where he promises to babysit Rebecca the next day when Ally will be at work and Brad will be at a job interview.

Fun fact: Brad and his daughter Rebecca are both werewolves and, as a result, colourblind.

Sorcery 101 #5 clips along into the next day with Brad driving Rebecca to the school where Danny teaches. Yeah. Danny’s day job is teaching history and tutoring the wayward youths who slip academically. Brad cautions Rebecca against biting strangers for fear of spreading lycanthropy; he himself having been bitten. Rebecca struggles to identify with this as she was born a werewolf. Inside the school Danny is tutoring one of the aforementioned wayward youths – Jeff – and, when Danny and Brad are out of the room is bitten by Rebecca. In true werewolf lore when Jeff opens his eyes they are amber and, the next night, a telltale transformation takes place.

Are you hooked yet? I was!

McDonald’s characters all speak differently – Danny employs more colloquialisms and curse words whereas Brad is more refined as he sets an example for Rebecca. Ally is decisive and this attention to vocal diversity really helps Terra feel like a fully realized setting and getting a chance to take a peek inside this world is awesome.

Sorcery 101 #5, and of course the entire series, has a distinctly indie/web comic look. McDonald is a very capable artist, but her greatest strength lies in her writing and world building. The characters are competently crafted, nobody wears the same face (Yaaaaay!), and the backgrounds never get too crowded. She manages to avoid many of the traps other independent comics I’ve read have fallen into.

However, there are times when the art can feel oversimplified. If you are a reader whose proclivities are more artistically inclined then Sorcery 101 #5 may not be your most favourite thing. Not to imply that it’s bad, it gets the job done, but it is not populated with the fanciest panels on the internet.

YOU SHOULD READ THIS

Sorcery 101 #5 costs $0.99. Each issue in the series is the same price. There are various places where the reader can purchase the full collection. Whichever of these methods appeal to you more I highly recommend taking a peek into Danny and his world of Terra it is web comic urban fantasy at its best.