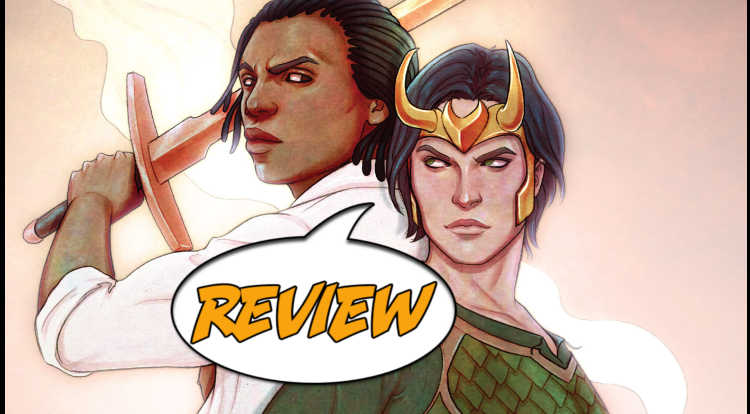 In the fourth issue of Loki: Agent of Asgard the reader doesn’t get to see very much about the title character, rather Sigurd reigns supreme in a pretty mediocre issue. Loki: Agent of Asgard, despite being an obvious ploy for the twenty-something-tumblr-user-female-market, has picked up in the most recent issues and Al Ewing had proved to me that he actually knew what he was doing with this book.

Then I came to Loki: Agent of Asgard #4 and found myself rather disappointed. It opens with Siguard (Asgard’s first hero – and points to Ewing for using a character of colour), ascending a mountain “somewhere in Tibet”. It is there that Sigurd meets Kaluu: Master of Black Magic. Sigurd explains to the less-than-receptive Kaluu that he is seeking to enter the cycle of reincarnation to avoid whatever tortures might hay for him at the hands of the Valkyrie.

Through a flashback we see Loki and Verity on what could be a date. It looks like a date? Loki’s cute. Verity’s cute. The status of potential date-hood is interrupted by the appearance of – unsurprisingly – Sigurd. He and Loki fight (quite creatively inside a dumpster), and Loki dies.

In the fourth issue of his own book.

It could have been a really meaningful moment were it not so transparent. Ewing shows his cards a little in this move. Loki: Agent of Asgard #4 is the first moment in this entire series (so far), where it feels like Ewing is working within a predetermined framework rather than letting the story grow organically. It’s a bit upsetting as a member of the target audience for the issue because it makes Loki’s solo title feel contrived – which it is.

Back to the plot of Loki: Agent of Asgard #4 – Sigurd and Kaluu come to an agreement (in the form of a blood pact), Kaluu reveals himself to be a much bigger villain than we were initially introduced to and Loki, in a rather unsurprising move, comes back to life! Much like Ewing, Loki shows his hand and the audience gets to see that the entire plot of Loki: Agent of Asgard #4 has played out according to Loki’s plan. The devilish contract between Sigurd and Kaluu’s-actual-identity is resolved and the God of Mischief and Lies completes his mission for the All-Mother. That last little detail is important as he failed in his last task for the ruling triumvirate of Asgard.

My main confusion is why Loki wears black nail polish throughout the issue and the series as a whole? Perhaps it’s a solely stylistic thing, but every time I see his ebony nails I find it … weird.

Colourist Nolan Woodard breathes a lot of life into Garbett’s lineart always garbing Loki in something green, if not always suggestive of his original Norse costume. However, I wish Siguard had been given a similar treatment (perhaps featured in wine red as a heroic figure?), rather than garbing the legendary hero/anti-hero in greys

ONLY IF YOU’RE INVESTED

If you haven’t been invested and involved in Loki: Agent of Asgard up to this point this issue is not a necessity. It may play out better when read as part of a collection. The previous four issues up to this point have grown in quality to this point and I can’t but hope this is just a swing and a miss rather than a strike out from this point on.